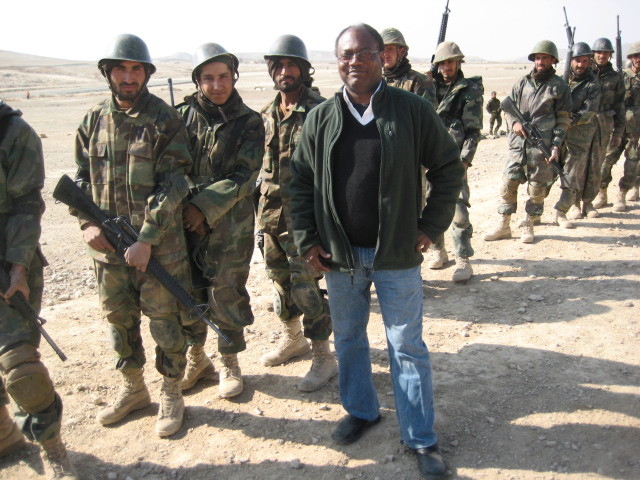 Journalists are responsible for documenting historical watersheds and the everyday lives of those affected by them. Making the stories accessible is the challenge, and leaving a mark for the purpose of future development is the hope.

For more than 30 years, JMSC director Keith Richburg has covered the rise and fall of regimes in every corner of the world, being a front row eyewitness to many events that have transformed the global balance of power.

From Haiti to Indonesia, Richburg’s experience as a foreign correspondent has taught him that nothing makes a story like the fall of a government, especially with long-time dictatorships.

“After the fall of a dictatorship you get to know stories that were inaccessible before, that’s what I find incredible about covering these stories,” he says, sitting in his office at HKU’s Eliot Hall.

And it was covering the fall of Jean-Claude Duvalier—“Baby Doc”—in Haiti in 1986 that marked his initiation as a foreign correspondent.

As the central American government was getting ready to fall, Richburg literally created his chance to chase the story.

“I always tell students here to read the news, that’s how you get opportunities,” he says.

And that is what he did at The Washington Post the morning he left for Haiti. Knowing that someone would be sent to cover the story, Richburg was first to get to the newsroom with a valid passport and the nerve to catch the attention of one of the foreign desk editors.

His departure was unexpected to the extent that he remembers the editor screaming, “Hey, what’s your name?” from the lift leaving the office to go the airport.

As a young reporter covering education for the Post, Richburg was literally catapulted into a nation in turmoil. He was full of adrenaline, and, according to a later reflection, had no idea what he was doing.

The help of a New York Times senior reporter proved indispensable and years later prompted him to come to the JMSC, “to give back, and to train the next generation”.

In addition to witnessing Baby Doc and his wife fleeing Haiti, Richburg and another New York Times reporter were the only two correspondents to discover a mass grave where the regime’s dissidents had been buried.

From that exciting—and fearless—experience in Haiti, Richburg’s career as a foreign correspondent took off.

He was then given his first bureau to cover—Southeast Asia, based in Manila. In the following years he covered events that changed the geopolitics of the region and Asia as a whole, like the fall of Suharto in Indonesia and the various coup attempts against President Corazon C. Aquino in the Philippines.

From another corner of the world, Somalia, which he covered during his time as bureau chief in Nairobi beginning in 1991, Richburg reported on the devastating famine, the collapse of the Somali state and the US intervention in 1993.

Richburg with other journalists atop the Sahafi Hotel, Mogadishu, 1993, at the height of America’s military intervention in Somalia

“Journalists and foreign correspondents thrive when they see chaos,” he says.

Richburg specifically refers to the first hours after the fall of a dictatorship, when journalists have the chance to start investigating stories before the military or a new government takes over.

It is in those moments that a correspondent can explore beyond the façade and can make a difference with their stories: talking to freed political prisoners, activists, and those who have been silenced for years.

“There was nothing like the first days after the fall of the Taliban in Afghanistan,” he recalls.

In 2001, Richburg was one of the first—if not the first―journalists in Kabul. For 14 hours―before the Northern Alliance secured the capital―he had unique access to almost every place in the city, from the abandoned US embassy to al-Qaida safe houses.

He also had the exceptional opportunity to document the population’s first impressions and reactions after the fall of one of the most repressive and extremist regimes of all time.

Richburg went back to Afghanistan multiple times to report on the political stagnation of the country and the US invasion, capturing ten years of warlordism and the effects of painful transitions on a fragmented people.

In those situations, “in a weird sort of way, it’s the adrenaline that drives you … it’s like skiing down a hill,” he says.

Richburg in a village in Afghanistan, 2004

It is the same adrenaline that allows foreign correspondents to witness violence without going nuts, the sort of detachment that they develop after years in the field―or after they see their first dead body.

Learning to control emotions is probably one of the most difficult “skills” that Richburg has to teach aspiring journalists at the JMSC.

As a veteran, Richburg maintains that “the best way that you can help is by writing a story, taking a great photo, a great video, and letting the world know what is happening”.

There are, of course, exceptions or small ways to try and make a difference. In the case of Richburg, it was telling Palestinians and Israelis to stop fighting long enough to help get children out of the battlefield during the Second Intifada.

When he retraces the most defining moments of his career as a foreign correspondent, the JMSC director acknowledges that he was lucky enough to live in places where he always wanted to be—and even daydreamt about.

From the very first second he started working as a summer intern at The Washington Post, Richburg wanted to leave DC, “where everybody goes waiting to get out”.

He had always been fascinated by Asia and fell in love with it after a one-week trip to Japan in 1985. He then went on to cover the continent almost in its entirety, from Beijing, Shanghai and Hong Kong, to Southeast Asia.

Richburg with Ai Weiwei in Beijing, 2011

Richburg also lived in Paris, covering Europe from 2000 to 2007, one of those places that―according to the foreign correspondents’ classification―falls under the “beautiful but pretty uneventful” category.

Nonetheless, the French capital had always been at the top of his list as he fell in love with journalism watching TV coverage of the Paris Peace Accords, which officially ended the Vietnam War in 1973.

As journalism has profoundly changed over the years, there are fewer foreign correspondents than before. The approach to reporting events keeps evolving, but nonetheless, Richburg believes that their role is invaluable.

Specifically, when he talks about his experience in North Korea―thus far the most secluded country he has ever reported from―he emphasises the role of a correspondent as an observer of the human condition and its multifaceted representations.

Richburg in Pyongyang, North Korea, on a rare reporting trip in Nov. 2011

In a country where nothing is really what it seems and everything is controlled by the regime, the only way to find and tell stories is through tiny—what may seem like meaningless—ordinary gestures and habits. In these situations, the role of a correspondent goes beyond reporting and almost becomes anthropological research.

Marta Colombo is a current Master of Journalism student at the JMSC. Follow her on Twitter here.

(Feature image: Richburg at the Kabul Military Training Centre (KMTC), where US troops were training the new Afghan army, Jan. 2010)