Would you give your life to tell the story? Whatever your answer, JMSC professor teaches students to be ready 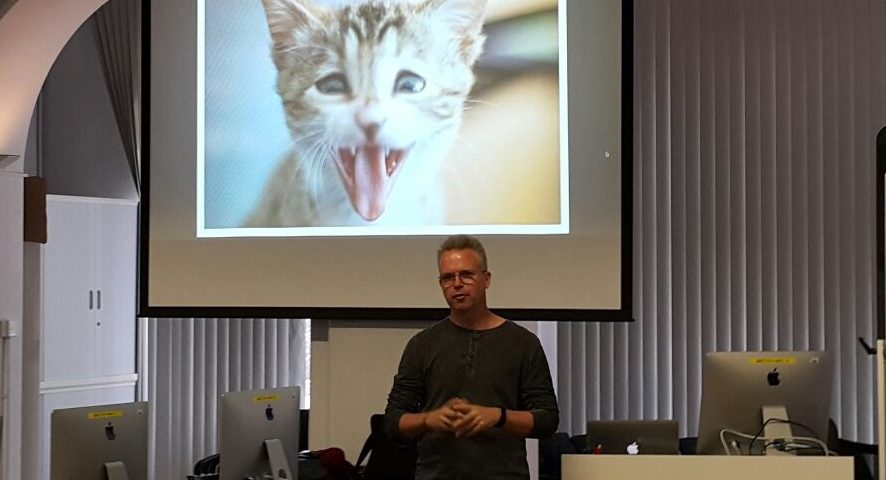 “Never work with children or animals,” the saying goes, but students at the JMSC recently learned how to do just that and make a successful living from it.

Dutch photographer Marcel Heijnen―who has been photographing cats in Hong Kong since moving back to the city in 2015―explained that persistence, patience and flexibility are the keys.

“You often need to wait for those unique synchronised moments that are so special,” he said. “It really pays off to wait around and go back to the location several times.”

Many of Heijnen’s photos explore the relationship between the cats and their owners. The series has gone viral globally: it has been featured on popular blogs, in newspapers such as The Guardian and by broadcasters such as China’s CCTV and Al Jazeera. Heijnen’s Instagram account is also approaching 17,000 followers.

Heijnen explained the advantages of adopting a flexible approach and not being weighed down by too much equipment.

“If you don’t get in the way, people are usually OK,” he said. “Try to travel light, without a lot of equipment and blend into the scene yourself.”

Heijnen told students how he started by taking a few photos of cats and uploading them to Facebook, but then realised he needed to develop a series rather than post occasional photos that might be nice individually.

In addition to the Shop Cats series, Heijnen has also developed series on Hong Kong Market Cats, Hong Kong Alley Cats and Hong Kong Garage Dogs. He described the last as being the “ying to the yang” of his cat series.

Heijnen, who was a graphic designer before switching full-time to photography, also said that he prefers Hong Kong as a location over Singapore.

“Hong Kong visually is very exciting,” he said. “There are alleys to explore and every day you come across different scenes and moments.”

The Hong Kong Shop Cats book was originally released in November 2016 and is now in its second edition. Follow Heijnen on Instagram here and visit his website here.