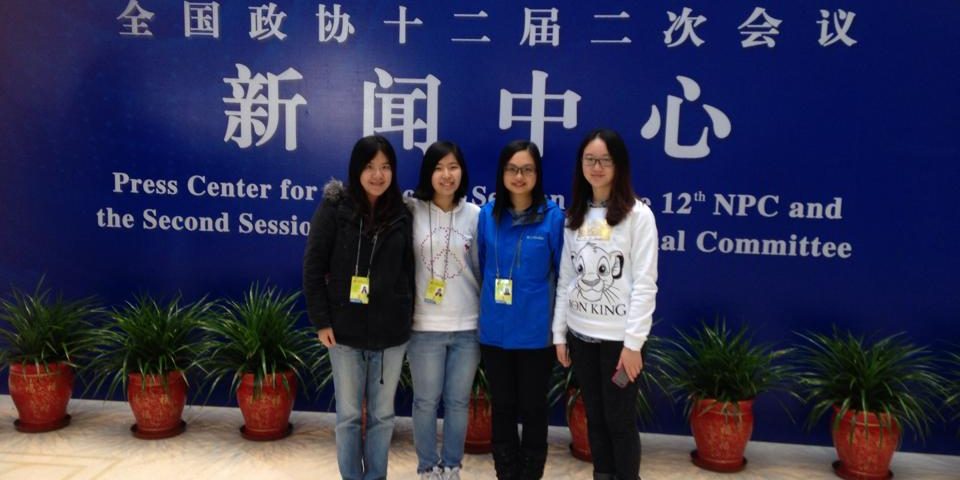 Four Bachelor of Journalism students from the Journalism and Media Studies Centre got a rare chance earlier this month to cover meetings of some of China’s leading state institutions– the second session of the 12th National People’s Congress, and the National Committee of the Chinese People’s Political Consultative Conference.

“Attending Yao Ming’s press conference was the most unforgettable part,” Liu said of her first real-life reporting experience.  As the former basketball star spoke, “We had to tweet quotes and also send photos and quotes to the online news desk. I was glad I was able to work under pressure in a real reporting situation,”

Xu wrote articles for Commercial Radio’s website, including an exclusive interview with Timothy Fok, a Hong Kong delegate to the CPPCC National Committee. “I’m grateful for the many assignments Commercial Radio gave me,” Xu said. “What I learnt most is that achieving clarity and accuracy under tight deadlines is crucial to being a good journalist.”

For Corey Ng, one of the biggest challenges was grasping the issues being discussed in China’s many different and distinctive accents. “We had to get the quotes right and send them in without much time to hear them again,” Ng said. “The experience really improved my listening skills and geared me up for my future career. It also made me realize there are often no second chances in journalism, and life.”

In addition to reporting on the two conferences, Jenny Zhang helped cover the March 6 defacing of Mao Zedong’s portrait in Tiananmen Square. “I was excited when I was able to confirm the incident from a vendor. It gave me a taste of what it’s like to do political reporting in China. Sometimes, you have to grab information just by chitchatting, so you have to be clever at speaking,” Zhang said.

The internships were arranged and funded by the Journalism Education Foundation Hong Kong Limited, a non-profit organization that seeks to raise the standards of journalism in Hong Kong. This is the sixth time that student journalists have covered the NPC and CPPCC meetings. In all, 26 students and two teachers participated from different universities around Hong Kong, covering stories for the SCMP, Commercial Radio, ATV, Hong Kong Economic Times, Ming Pao, and Sing Tao Daily.