Mar 9: Covering the World When the rules keep Changing 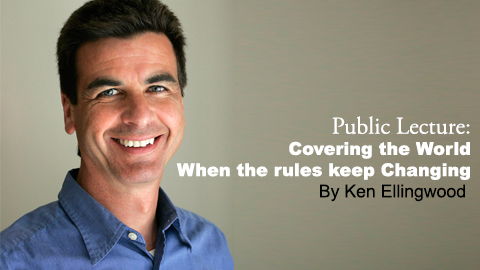 Covering the World When the rules keep Changing By Ken Ellingwood

Ken Ellingwood, an award-winning former correspondent for the Los Angeles Times who has reported from some of the world’s hot spots, discusses how traditional U.S. media seek to stay relevant in a hyper-fast digital age in which even wars now lack recognizable battle lines.

Ellingwood, based in Jerusalem from 2003 to 2008, reported from the front lines of the Israeli-Palestinian conflict, as well as from Iraq, Lebanon, Jordan, Egypt and Iran. He worked from the newspaper’s Mexico City bureau from 2008 to 2012, reporting widely on Mexico’s violent drug war. Ellingwood was part of a team of Times reporters that won the Overseas Press Club’s top news award, and other prizes, for its Mexico coverage. He contributed to coverage of the 2010 Haiti earthquake for which the newspaper won the Robert F. Kennedy Journalism Award in international reporting. Ellingwood is the author of “Hard Line: Life and Death on the U.S.-Mexico Border” and currently on the faculty at Nanjing University.

Please click here to register online or email JMSCSH@hku.hk to reserve a place.