Overnight At The Museum – A Reporting Assignment Like No Other

The assignment would make a hardened war correspondent tremble: cover a pair of science camps spent locked up overnight in a museum with 300 teenagers on two consecutive Fridays. 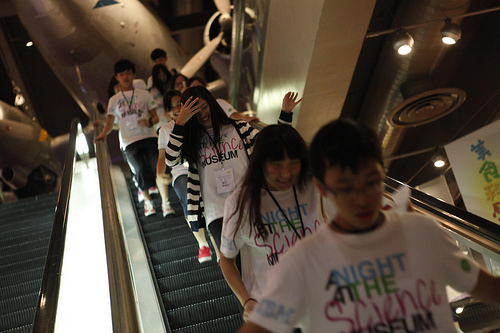 The Amazing Race. Photographers had to be in the right place at the right time … Photo: AJ Libunao

The assignment would make a hardened war correspondent tremble: cover a pair of science camps spent locked up overnight in a museum with 300 teenagers.

But student journalists from the JMSC picked up the challenge and produced a fine multi-media file documenting the activities of hundreds of high school students in what the University of Hong Kong (HKU) organisers described as “No ordinary field-trip”.

Dubbed A Night at the Science Museum, the pioneering two-part festival of hands-on science and engineering activities plus inter-school competitions was not an easy event to report.

Key to success rested on choosing the right tools for the job and meticulous planning. Reporting more than 12 hours of continuous activity — and keeping track of video, text, photos and audio files — posed a logistical challenge. 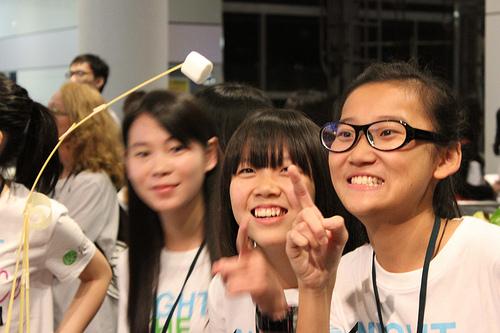 Students were required to build a tower from spaghetti, tape and string, topped by a marshmallow. The tallest won.

Covering a competition that sent 300 students hurtling around all four floors of the museum collecting clues lent itself to video and stills photography — and required careful positioning to catch more than blurred images of sprinting teens.

In between all this mass activity, students attended workshops providing hands on experiments, enjoying a range of often bizarre activities.

One group tossed eggs off a balcony. Another raised finger-prints from a series of potential murder weapons ranging from a baseball bat to a wine bottle.

Some students flailed around in darkness — experiencing a Hong Kong without the glare of light pollution that has become ubiquitous. That was not a workshop that lent itself to photography.

LIVE ON THE WEB – NO ROOM FOR ERROR

The organisers, HKU’s faculties of Engineering and Science, wanted the opening hour or so of both evenings covered live.

The rest of the team got busy photographing, audio-and video-recording and writing up the antics of the youthful participants.

They recorded and captured footage for a short video wrap to be ready before breakfast and clips for a longer documentary to be put together afterwards.

Speed was of the essence but patience was required. Coaxing meaningful quotes from teenagers was no easy task as any parent can attest. 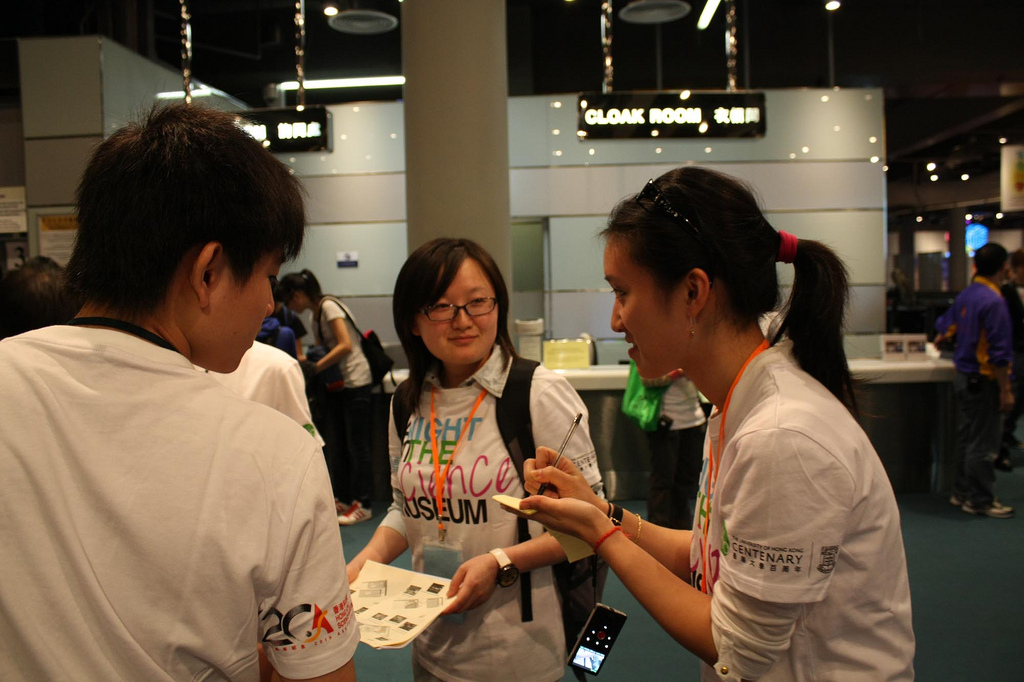 In a temporary newsroom set up in the Science Museum’s Ground Floor computer room, JMSC faculty news edited and filed material as the student reporters checked in and out to edit, upload and tag their material on  a set of labelled laptops. 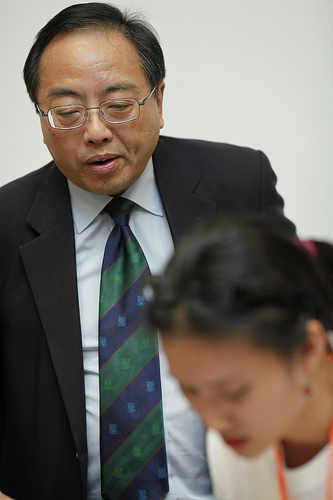 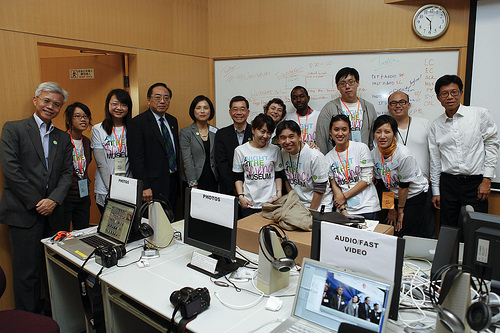 Vice Chancellor Professor Lap-Chee Tsui  (4th from left) after inspecting the newsroom. The Museum Night was part of HKU

Experiential learning — or learning through doing — is a hallmark of the JMSC experience.

Both graduate and undergraduate students put into practice what they had learned in class during the museum assignment.

The Vice Chancellor, who visited the news room on the second night and inspected work in progress, declared himself impressed.

Professor Tsui arrived just at one of the busiest parts of the evening.

Half the JMSC team were out reporting but the other half had hunkered down to write, process, edit and file their material.

NO TIME TO SLEEP … WELL NOT MUCH 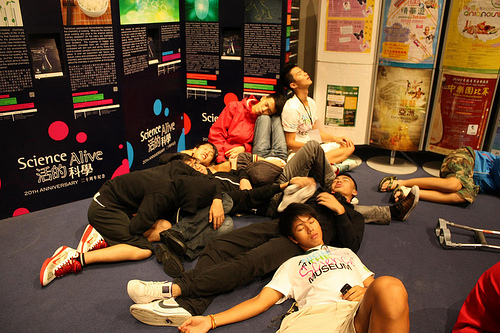 The idea behind the nightcamps at the Science Museum, said Professor Paul Cheung of HKU’s Engineering Department, a driving force in getting the unprecedented event off the ground, was to give students a taste of what awaited those who planned to go on to study science subjects at college.

“Youngsters like to stay up all night and sleep all day so this was thought to be an ideal way of reaching them,” Cheung said.

Many teens did in fact grab some sleep. But only a handful of the JMSC student journalists got much more than a quick catnap on the newsroom floor. But only once their work was done. The others meanwhile, worked on until the sun rose over Kowloon.

Click on the appropriate tab to see some of their efforts: 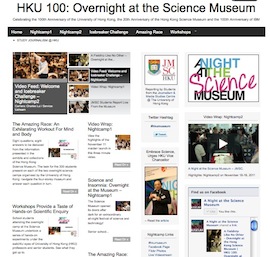 The website set up at http://jmsc.hku.hk/sites/science-museum/ showcased all the reporting. The JMSC journalists wrote up their articles and embedded photos, video, soundslides and social media elements.

The Facebook page, created and directed by Masato Kajimoto, was embedded on the home page.

{tab=Video}
This video wrap had to be shot, captured, edited and output before breakfast. It was broadcast to the student body as the science camp wound down.

A Night at the Science Museum HKU 100 from JMSC HKU on Vimeo.

Throughout the night, student-journalists needed to remember to shoot video footage both for the wrap and for a longer documentary to be edited afterwards. JMSC tutor and web video specialist Kevin Lau had to edit the wrap fast in order to meet such a tight deadline.

Livestreaming the opening segments fell to MJ Charles Liu, who put his height to good use:  View his videostreams here.

His page, http://www.facebook.com/hkusciencemuseum, captured more than 300 followers before the science camp was out — underscoring the importance of Facebook to teens.

Student journalists received crash-course in fast reporting skills, a particularly important technique to master, especially for those contemplating a career with the wire services or 24-hour revolving news broadcasters. Flickr, the photosharing site, proved useful in keeping track of hundreds of photographs.

A useful tool for displaying audio-visual stories, but far faster to compile and upload than video, Soundslides can prove a powerful reporting tool. Song Yang, a doctorate student in education who attended JMSC online classes as part of her thesis research, ventured into hands-on journalism at the event by producing two fine soundslides:

One is embedded below. The other can be seen at Icebreaker Challenge: Take This Spaghetti and Marshmallow …

Shooting powerful photos was only part of the job; photographers, under the direction of AJ Libunao, also had to edit, caption, tag and upload their work for matching with stories and as stand-alone chronicles of the events of the two nights. 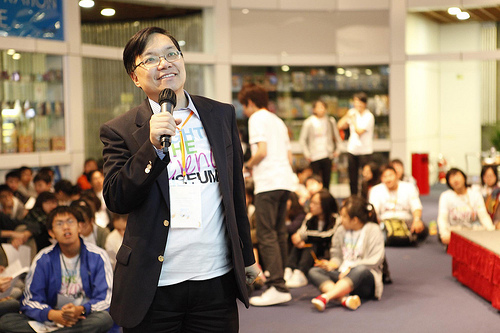 Professor Cheung served as MC and took a lead role in organising the event.