Symposium on Digital Research into Media and Politics (24 Aug) 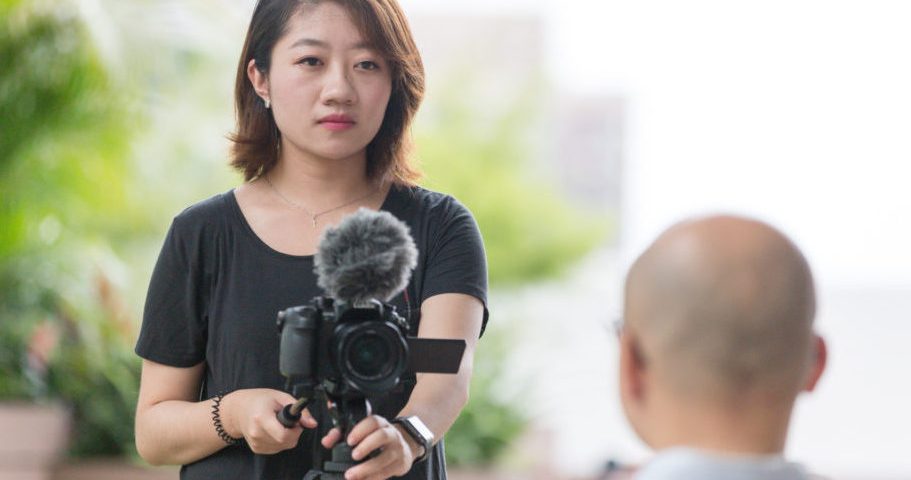 With video stories about mainland Chinese and local student tensions at the University of Hong Kong and the growing drone-flying community, Sida Wang (MJ, 2018) hit plenty of high notes during her time at the Journalism and Media Studies Centre. But she took her achievements to new heights in June by becoming the latest winner of the prestigious Mick Deane Scholarship for Video Journalism.

The scholarship, which honours the veteran British cameraman killed on duty in 2013, is awarded to a JMSC student who shows exceptional talent, skills and commitment to excellence in video journalism. The award, which was inaugurated by APV in conjunction with JMSC, included a HK$20,000 cash prize intended to fund an independent video project.

“I feel like all my efforts for this year have paid off,” said an excited Sida on learning of her win. “This scholarship will keep inspiring me to pursue my career in video journalism. I am extremely passionate about visual storytelling, and I believe it’s a way of making stories more deeply informative and visually engaging.”

Sida was chosen by a panel of judges, comprising APV founder Mark Erder, Diana Jou, filmmaker and photographer at Semi Circle Studio, Fidelity International Senior Multimedia Producer Eva Tam, and JMSC Director Keith Richburg. “Sida was one of the hardest working students this year and is truly excited by video journalism,” said Jou. “Editorially, she is versatile, someone who can tackle hard topics for documentaries, such as Mainland and Hong Kong student tensions on campus, as well as breaking news and features.”

Kevin Sites, Director of the JMSC Master of Journalism programme, said Sida encapsulated the spirit of video storytelling: “It can be like poetry when done well – it uses imagery and economy of words,” he said.

Sida said she had very little video experience when she started the course. “I was only thinking of myself as a writing person and I have never touched a camera for video shooting before I entered JMSC,” she said.

She added that Sites and the JMSC video journalism team gave her the inspiration to embrace video. “Sida represents the very thing we most hope will happen at the JMSC,” said Sites. “We admit a student with potential and then see that potential come to full fruition.”

Erder added that in choosing a scholarship recipient, he looks for a student who is seen to be dedicated to the craft. “We look for somebody who is mature and is recognised by both peers and teachers as a person who has the potential to make a significant contribution to journalism.”

Last year’s winner was Zhang Hao (MJ, 2017), from Yinchuan, capital of China’s Ningxia Hui Autonomous Region, who was a features writer, on-camera reporter and video for the English-language channel of CCTV.com/CNTV Beijing before starting her course at JMSC.

Deane, for whom the scholarship is named, was killed by a sniper’s bullet at the age of 61 while covering the “Arab Spring” protests in Egypt in 2013. Deane had previously worked in Hong Kong from 1988 to 1994 as ITN’s Asia cameraman. For the last 15 years of his life he worked for Britain’s Sky News, based in the United States and London before his assignment to the Middle East.

“He approached his work with an embracing sense of collaboration, discipline and compassion,” recalled Erder, a long-time friend and colleague. “No matter how far afield he was he always managed to balance his commitment to the job with a commitment to his family which is oftentimes a rare quality in foreign correspondents.”

For Sida, the scholarship represents a potential opportunity to explore the wider world. “I was born on the Tibetan Plateau and lived in Canada for more than six years,” she said. “I enjoy living in different places and experiencing their cultures. I will be excited to work on stories that can lift the mysterious veil from different countries, letting audiences understand each other more.”