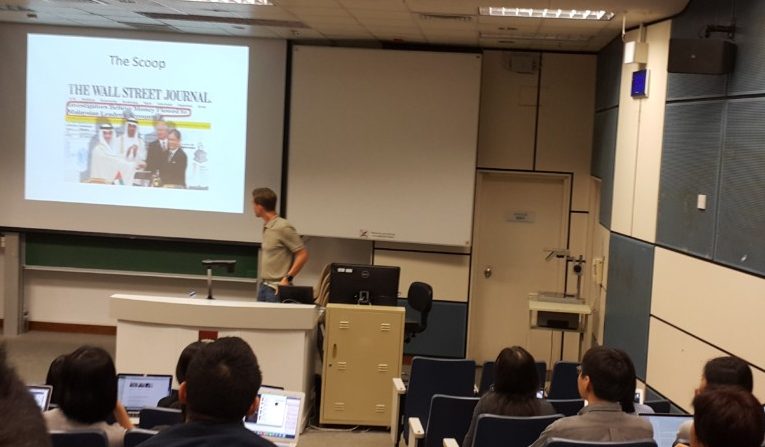 Being an investigative reporter is tough, but there are ways to make it easier, 2016 Pulitzer Prize for International Reporting finalist Tom Wright told JMSC students in a recent workshop.

Wright, Journalist-in-Residence at the JMSC and Asia Economics Editor at The Wall Street Journal, gave a talk on key tips for investigative reporting to Bachelor and Master of Journalism students on 4 May at HKU.

He described investigative journalism as “frustrating, difficult, and poorly paid” but offered tips and anecdotes from his experience in the field on how to start and develop stories, how to build source networks and general skills and values that investigative reporters should have.

Tom Wright, Asia Economics Editor at The Wall Street Journal and JMSC Journalist-in-Residence spoke to Bachelor and Master of Journalism students on 4 May

“Your husband or wife will hate you because you talk about it all the time … people get angry with you … you fear for your safety,” Wright said. “But it’s the best job in the world as you’re doing good, helping to shed light on something.”

He urged students to always keep this in mind and not be afraid to defend and stand by their stories if they are confident about their research and groundwork.

“If you take one thing away from tonight, don’t give in to pressure,” said Wright. “If you’ve done your work properly, checked your sources and believe in your information, stick to your guns.”

Wright referred to how this is currently the case with major newspapers in the US not bowing to pressure from the Trump administration.

Despite the difficulties investigative journalists face, Wright emphasised the importance of retaining optimism and tenacity.

“Always be optimistic that you can get something … always think you can achieve what you want to,” he said. “You’ll be surprised how often that starts to work out.”

On finding, starting and developing stories

One common way to find a good story is to keep an eye out for unusual activities or developments on your beat, explained Wright.

Referring specifically to his work on business and financial investigations, Wright said: “Follow the money is a bit of a cliché, but if you work out where the money is flowing it can help you get your next story.”

He also told students that starting to write and get published is a great catalyst for developing stories further and can have a snowball effect with sources and information.

“If you want to get going on a story, start writing … it gets you sources as once you start to break a story other people connected to it will contact you.”

Wright said that developing a reputation as an authority within a specific area of your beat or on a specific story is a good way to build source networks.

“Whatever it is you’re covering, you can be seen as a lead … you have to be seen as an expert in whatever you’re covering so sources come to you,” he said. “Make sure sources see you as an equal … equally knowledgeable about the subject as they are.”

He explained how credibility is built up over time, as a reliable reporter who writes the truth, and this in turn can be something which is attractive to sources.

On a more fundamental level, Wright said that successfully gathering information from sources is often down to having solid people and interpersonal skills.

“Part of it is basic social skills―as a journalist, it’s good if you can make people want to talk to you,” he said.

Once contact with sources has been made, Wright emphasised the importance of “triangulation” and corroborating information from several sources as most of the time it isn’t possible to get “a golden source who knows everything”.

“Everything has to be 100%,” he said. “Never write something that you don’t know is completely true―never make small jumps or assumptions.”

Wright said that his golden rules for dealing with sources are to never pay for information and always be up front with whoever he is speaking to that he is a journalist.

“I personally don’t believe in the need for sting operations,” he said, citing a common practice with some British tabloid newspapers.

Ultimately, he said, gathering information to develop a story is about casting a wide net and always looking out for new opportunities to develop your network.

“The trick to finding out stuff is to know a lot of people who will talk to you. Whenever you speak to someone, ask for two more people you could talk to and expand your network.”

On skills and values

“One of the most important things is creativity,” said Wright, explaining that it is important in finding ways to get information (such as waiting in a certain location to make contact with a potential source) and also crucial to developing stories through follow-up pieces.

“You need to be able to think of interesting and engaging ways to tell the ‘day two’ story,” he said.

Wright said that having a positive mindset is important throughout investigations, but being optimistic and tenacious can specifically pay off when trying to contact sources. Going back again the next day can often result in meeting new sources or receiving further leads for information.

He stressed the importance of tenacity and persistence in the face of what can be extremely boring and time-consuming work, such as spending hours searching through documents, files and data.

“If you’re interested in this type of work, you have to be very single-minded,” Wright said.

When all else fails―citing a random chance encounter he had during a cycling trip in Hong Kong with a source that he’d been trying to speak with for more than two years―Wright said that there can be times when breakthroughs only come by good fortune.

“Sometimes you just have to get lucky―there’s a lot of luck in journalism,” he said.

As Journalist-in-Residence at the JMSC, Wright supervises Master of Journalism students with their capstone projects.