China’s best known Ventriloquist is solo traveler in the spotlight 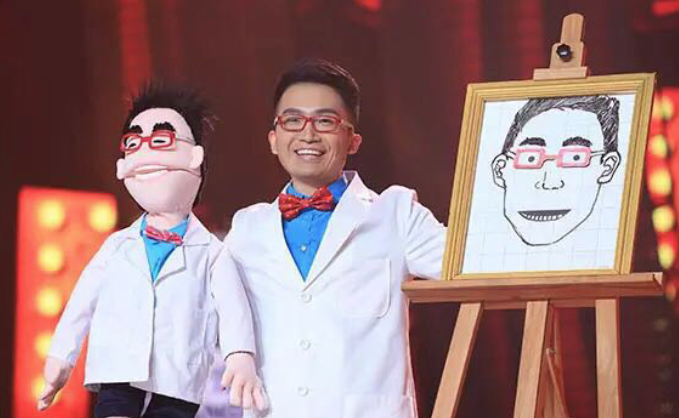 Only one man in a white doctor’s coat stood on the stage and held a puppet with the same outfit in his right hand. But there were two persons’ voices resounding in the theater. The man and the puppet “Little Doctor” chatted with each other freely, just like a pair of crosstalk partners.

One asked in normal male voice, “why do you miss the emcee?” The other answered with a delightfully sharp voice; “Because I miss him so much that I cannot even remember who he is!” The audience roared with laughter, delighted by the creative sense of humor and skillful use of Chinese anecdotes.

The man is on stage named Deli Kong, one of the most famous ventriloquists in China, and also a full-time chemist at a local hospital in Zhejiang Province, Southeastern China. At 33 years old, he is excellent in comedy ventriloquism shows with props like the puppet and a mask.

But things did not run that smoothly at the very beginning.

Ten years ago, as a northern migrant who couldn’t understand the local dialect, Deli found it hard to mingle with others. Growing up in a single parent family and used to being crowded out by relatives, he was so desperate to find a partner to share feelings with that when he saw a ventriloquism performance on TV, he immediately fell in love with it.

He started to study it by himself, but faced the lack of learning materials and professional guidance. People around him, skeptical as they were, mocked him for ignoring his real job. And when he practiced in the open area, the various strange sounds he made often made him the target of dogs.

“If you really like something and immerse yourself inside, you will forget everything, even the passing of time and all of the fatigue,” said Deli.

Fortunately, after a lot of hard work, he contacted and received help from overseas professional ventriloquists, and now sees himself as a doctor distributing happiness.

“Being a ventriloquist does not contradict with being a doctor. A Doctor is committed to free people from physical pains, while ventriloquist helps to heal mental wounds.”

The past experience made Deli deeply understand the sense of loneliness and the feeling of living in an isolated environment. Thus, he goes to an orphanage near his hospital occasionally, and performs charity shows, in order to bring more happiness to the children.

“Ventriloquism helped an autistic kid become who I am now. The puppet has the magic to halve the sorrow and double the happiness,” Deli said.

From the little sense of accomplishment when amusing children who are afraid of injection, to the shiny confidence and optimism when standing on the final stage of The Brilliant Chinese, a large reality show in China, Deli believes only the most dedicated person can be the most visible, and he regards those as precious rewards for his obsession with ventriloquism.

The magic is not limited to him.

So far, Deli has over 300 students who want to learn his style of performing. They all have seen ventriloquism change their lives in different ways. A grocery owner found performing enriches her life and improves her living standard, and a kid with AIDS became braver and brighter after taking up this art.

To Deli, this is an inheritance of love and gratitude. He wants to see more gifted ventriloquists spring up, and then join together to build up a ventriloquism industry in China. He is more willing to be a booster instead of a founder. “Throwing out a brick to get a gem, as a Chinese idiom says,” Deli said.

As a public figure, he is often recognized in the markets and on the street. Every time, he tells the other they get the wrong person. He agrees that the glory in the spotlight is transient, while leading an ordinary life lasts longer.

“One of my teachers once told me: Ruining ventriloquist’s loneliness is ruining his future.” Although ventriloquism is an art creating beauty and happiness to large audiences, being a ventriloquist is destined to having a lonely profession. He doesn’t have many human friends, but he values the mysterious connection with his puppets more than anything.

Now, Deli have over one hundred puppets, not to mention other props like masks. His first puppet was a little emperor made by himself. Among Deli’s other favorites are “Little doctor”, a man-height ostrich named “Smile” and a gibbon whose arms can easily hug around him.

“Everyone has various emotions. What ventriloquist does is to endow each emotion a different human figure. Puppet is actually another self, and another expression of inner world. It is part of my life.”

Deli hopes he can always keep the passion for life and draw the inspiration of creation from it. And someday in the future, he can hold a vent prop exhibition and record every unique stories of his puppets.