Blind since childhood, HK activist fights for the visually impaired 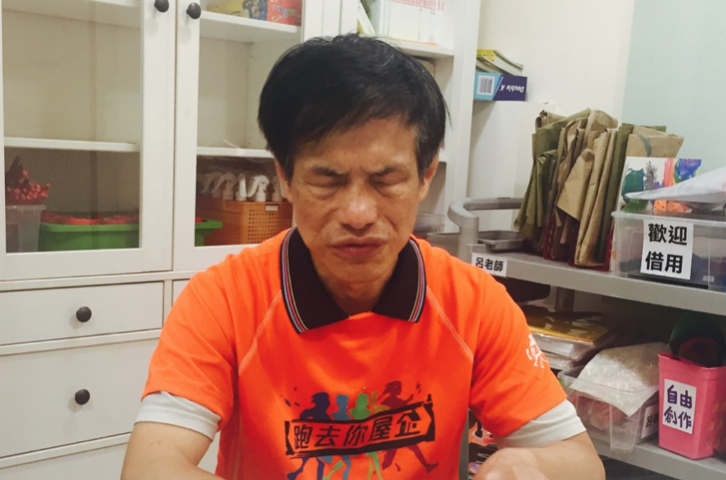 With great joy and expectation, Mr. Chong Chan-Yau stood at the finish line of “Run for Vision”, a round-the-island 50 km relay, listening carefully to the sounds of footsteps and applause and shouting out to cheer on runners, “Go! Go! Go!”

The charity run was held at Sun Yat Sen Memorial Park on 11 October, with more than two hundred sighted and visually impaired participants, in order to raise funds for people with visual impairment in Hong Kong.

During the interview, Mr. Chong Chan-yau took down some notes by a Braille typewriter

As the President of Hong Kong Blind Union (HKBU), one of the organizers of the activity, Chong was so glad to see the increasing number of the people who care about the life and rights of visually impaired people. “Things are getting better now, compared to what they were when I was young.,” Chong said.

“Someone should stand out.”

At age of six, Chong lost his eyesight. Undeterred, he studied hard and was admitted into The University of Hong Kong in 1978, as one of the earliest blind students in the university.

Chong once thought he would devote himself to academia, but in 1979, having one of his visually impaired friends who wanted to be a civil servant be rejected by the government became the turning point of his life.

“They even declined to give him the chance to take the recruitment examination, just because he was blind!” Chong still felt angry when he recalled it after decades.

Indignant and irritated, Chong wrote a petition to demand for the equal opportunity for the visually impaired and handed it to The Governor of Hong Kong in a public meeting in HKU, starting his life of striving for equal rights.

“Much to my surprise, it did work,” he said. The Hong Kong Government took his request into account and decided to provide special exam equipment to disabled candidates. “That’s really encouraged me and taught me a lesson that there had to be someone to stand out.”

“We can do as well as ordinary people do.”

After receiving a Master’s degree from the University of London, Chong decided to challenge himself, ”I want to prove that visually impaired people can have the ability to take ordinary jobs, ”he said.

In 1990, Chong passed the recruitment examination in his third try and became the first blind Administrative Officer in the Hong Kong Government. Three years later, he turned full time to work for the underprivileged in Oxfam Hong Kong, an independent international development and humanitarian organization.

In the following years, Chong has played so many different roles: a guest lecturer in the university, a co-drafter of the local Disability Discrimination Ordinance and a founding member of the Civil Party. “I want to provide my own experience as an impetus of social reform, that is, a visually impaired person can do as well as ordinary person do.”

“Things are getting better now, but still a lot need to be done.”

After decades of effort, the public has paid increasing attention to visually impaired people and the government has provided more resources as well as opportunities. ”Changes are taking place step by step.” said Chong.

Though he has witnessed lots of positive changes in Hong Kong society, Chong pointed out there were still a lot to be improved, taking the lack of barrier-free facilities as an example.

According to a report released by Census and Statistics Department in 2014, there are about 174,800 visually impaired people in Hong Kong, with limited barrier-free facilities and public services. “The HKBU receive piles of complaints on such issue every year,” said Chong, “And one purpose of Run for Vision was to call for public concern with the needs of visually impaired people.”

“The real equality is offering opportunities, but not expressing sympathy,” said Chong.

Having lost his sight for more than fifty years, Chong simply viewed his visual impairment as the loss of organ, but not the loss of confidence and expectations of life. He wanted to inspire all the disabled by his own experience: a person with physical disabilities who can still live a colorful life.

“I hope to see an inclusive society and I am striving for it,” said Chong, applauding warmly for all the participants of “Run for Vision”.