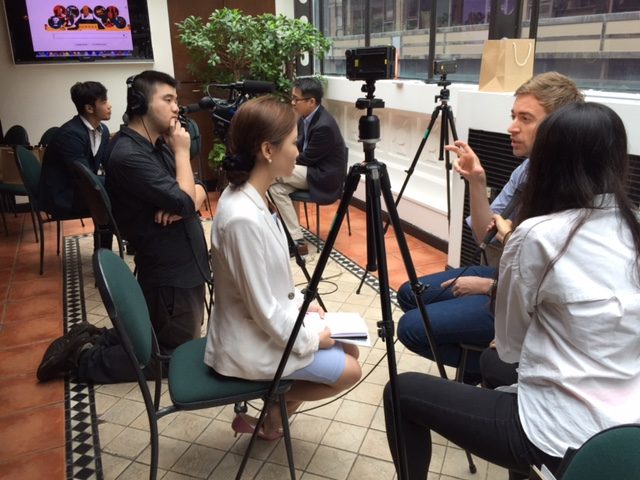 A team of JMSC students learned about logistical planning and creative editing while covering a high-profile journalism conference in Hong Kong.

Journalists from leading news organisations spoke at the Foreign Correspondents’ Club on 23 April during the club’s conference on ‘Covering News in the Era of Digital Disruption’.

A team of eleven undergraduate students comprising four camera crews meanwhile carried out interviews with some of the speakers, on topics including career advice, covering conflicts and disasters, and the future of journalism.

A key challenge was to complete as many interviews as possible during the ten-minute breaks between talks. This was made possible by assigning two reporters and two camera crews for each event. The students set up an editing suite in the basement of the FCC, downloaded and logged footage after each event, and were able to publish edited video on the same day as it was shot.

One of the main goals of the students—who were just completing a three-month TV news production course—was to move away from the traditional press conference format and use new types of visual storytelling with creative editing, according to Corinne Vigniel, Honorary Lecturer at the JMSC and supervisor of the joint JMSC-FCC project.

‘Students focused on getting one-on-one interviews with key speakers, developing tight storylines and adding rich visual elements,’ Vigniel said. ‘The goal was to produce interesting and informative stories, grab viewer’s attention right from the start and sustain interest to the end.’

Students experimented with different editing styles, including the creative use of slates and music. Footage of the opening panel, for example—which offered career advice to new journalists—was narrowed down by Bachelor of Journalism student Jasmine Hong to shots from a single angle and structured in a ‘top five’ list format, which works very well for YouTube and the web.

For their clip on the best methods of verifying information on Chinese social media, Yedda Wang of the University of Melbourne and Hai Yang from the University of California, Santa Barbara, filmed people accessing Chinese social media on their mobile phones and computers. They supplemented those shots with photos and videos taken during recent trips to Guangdong province for the JMSC’s China Media Project.

Students set up an editing suite in the FCC

‘It was an absolutely amazing and eye-opening experience for all of us,’ said Vivian Lin, an exchange student from Australia.

Corinne Vigniel called the event ‘lots of fun and a great opportunity for the students to do real work and rub shoulders with some of the finest journalists in the business’.

The news agency Agence France-Presse donated dozens of videos and photos for the project, including footage and still photos of the conflicts in Syria and Afghanistan, and recent earthquakes in Nepal and Taiwan.

Natasha Khan, a member of the FCC’s board of governors and 2011 Master of Journalism alumna who is now a reporter for Bloomberg News, said the response to the conference was overwhelmingly positive. ‘We hosted more than 180 people at the FCC,’ she said, ‘and it was nice to see new friendships being forged and journalists who have followed each other’s bylines for years meeting for the first time.’

JMSC Director Ying Chan, speaking at the conference, said that current journalism students should be optimistic about their futures in the profession. ‘I have more job offers than I have good graduates to send … You’re in demand—plus you’re cheap!’ she said.

Click here to watch the students’ videos. The full rundown of the conference can be found here.