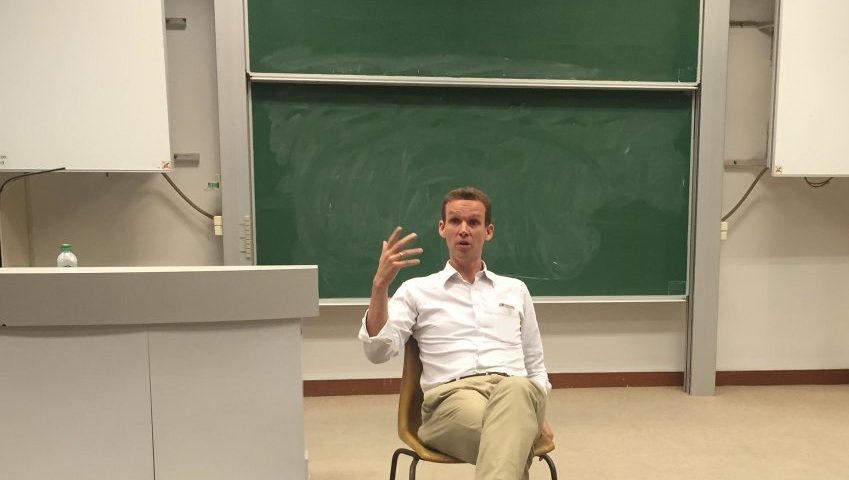 Wright, Asia Economics Editor for the Journal, spoke at the JMSC on 19 April, just after it was revealed that he and several colleagues had been finalists for the 2016 Pulitzer Prize for International Reporting.

He was addressing the JMSC’s graduate-level ‘Global Financial Journalism’ course, where he discussed his team’s coverage of the still-evolving scandal involving the Malaysian state investment company 1MDB, and Malaysian Prime Minister Najib Razak.

Investigators believe that more than US$1 billion went into Prime Minister Najib’s personal bank accounts, much of it from the state investment fund, which was set up by the prime minister himself. Najib has denied any wrongdoing in the case.

Wright’s comments were mostly private, but he did emphasise the amount of hard work required for genuine investigative journalism.

While his reporting on the story took him to Kuala Lumpur as well as Sardinia and Hawaii, most of the reporting was old-fashioned digging through documents, along with many hours spent alone in coffee shops while waiting for sources to show up, according to Wright.

‘You have to be a bit of a sociopath, not a normal person, to do this kind of job,’ he said.

The Pulitzer jury has described the coverage of the scandal by Wright and WSJ colleagues Bradley Hope, Simon Clark, Mia Lamar and James Hookway as ‘masterful reporting that exposed corruption at the highest levels of a fragile democracy, leading to “Malaysia’s Watergate”’.