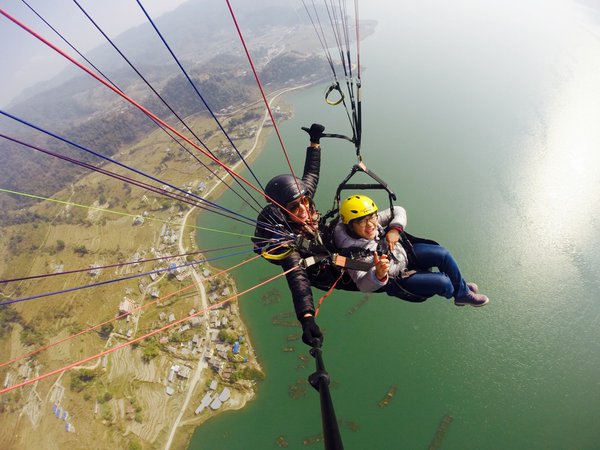 JMSC students faced challenges including keeping up with Aung San Suu Kyi during a walkabout, audio dubbing the voice of Hong Kong Chief Executive CY Leung, and paragliding high above a valley in Nepal during their winter internship placements this year.

Over 50 Master of Journalism (MJ) students completed workplace internships with leading media organisations during the winter break in their studies.

Aung San Suu Kyi appearing in public for the first time after the recent elections in Myanmar, taken by Shen Zhefan during his internship in the country.

In addition to placements at companies including CNN, Forbes, Thomson Reuters and The Financial Times in Hong Kong and mainland China, this year students also joined media organisations in Malaysia, Nepal and Myanmar.

Shen Zhefan said: ‘At Mizzima, interns get the same opportunities and practice as reporters. The editors encouraged us to cover whichever stories we were interested in, and gave us their contacts, sources and suggestions. Very helpful.’

Vicky Liang Siran and Xu Xiaotong spent a month at the Nepali Times. They reported on Chinese tourists making the dangerous journey along the trans-Himalayan road into Nepal, and an abandoned town in the wake of last year’s earthquake. They also experienced paragliding for another assignment, and visited the printing office to see the next edition of the newspaper coming off the press.

Other students stayed in Hong Kong for their internships but found their experiences nonetheless rewarding.

Peg-Yoc Hui Valdez during her internship at Forbes.

Coming from a non-journalistic background in fashion, Peg-Yoc Hui Valdez relished the chance to gain experience of working in a newsroom for the first time at Forbes: ‘It has been fun to be part of the work that goes behind putting together a Forbes Billionaires list. I’ve worked very closely with the Asia Online Editor, who has given me a lot of knowledge in very little time.’

Interning with CNN, Kevin Lui got hands-on experience with online journalism and also television news production as he shadowed the team that produces News Stream. His web reports included the latest toy trends at HK’s annual Toys and Games Fair and a story about the world’s most photogenic potato.

Kevin was also asked to do the audio dubbing for the English translation of HK leader CY Leung’s speech in this report about local film ‘Ten Years’.

Learning how to tackle China’s Great Firewall was a key challenge for students who crossed the border to join mainland news organisations.

The LA Times’ office in Beijing, Caixin Media and travel website GoKunming were amongst the destinations in China this year, with students noting the importance of being able to tailor reports to survive censorship by authorities in the country.

This theme was also highlighted by students who interned at those Hong Kong-based media organisations which are increasingly targeting mainland audiences with their Chinese-language reporting.

Interns with companies such as Initium Media and Phoenix TV explained how they quickly began to understand the importance of knowing not just the news value of a story in China, but also the ‘sensitivity value’. Another quipped: ‘Being blocked is an honour!’

The JMSC has an extensive internship network with leading international media organisations and the majority of MJ students complete internships as part of the programme, giving them an opportunity to apply the skills and knowledge they have developed in the classroom.

To learn more about the internship scheme and read placement stories from previous years, click here.