Amendment of the Copyright Bill in Hong Kong (Talk on 18 Dec.) 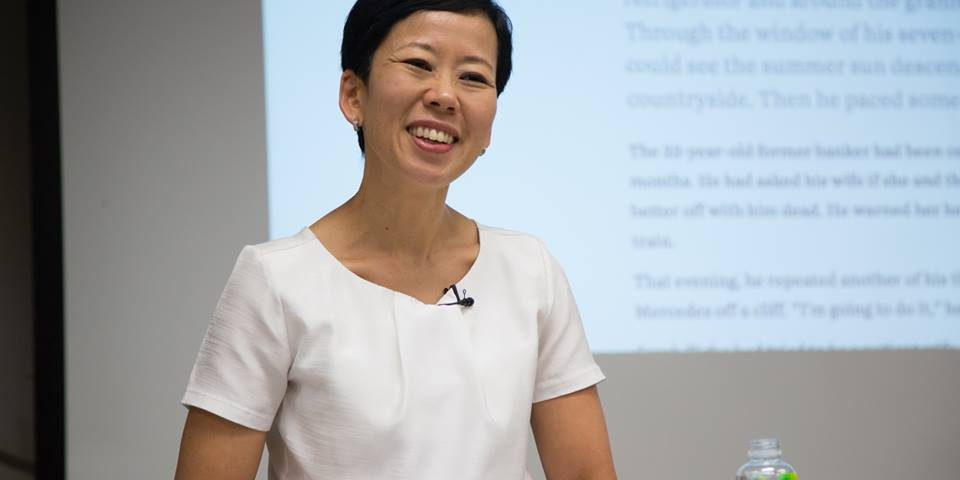 Reporters can focus on a human story or explain a process in detail to produce compelling financial stories, said  Yumiko Ono, Asia Digital Editor for The Wall Street Journal.

Yumiko shared the secrets of writing engaging business news stories in a talk to Master of Journalism (MJ) students on 23 November.

She used case studies of recently published WSJ articles to illustrate the different ways of constructing narratives in business writing and the various storytelling tools.

Financial stories are also stories about people, said Yumiko, who cited  the WSJ series, ‘The unraveling of Tom Hayes’, as an example of business reporting with a human focus: ‘One way to make business reporting interesting is to focus on a person, someone who resembles the issue you want to focus on.’ Having a person in the middle of the narrative in business stories can help to create rich tales, full of detail, she said.

In another WSJ series on e-commerce, the writers described in detail a process (‘yarn stories’, as Yumiko calls them) to bring the financial report to life.

The ‘Indian Startups Vie to Win E-Commerce Battle’ piece followed a sari on a 1,200 km journey from seller to buyer to illustrate the challenges facing e-commerce firms in India. Visuals, such as maps, infographics, photos and videos, were also important to make the story come to life and engage as many readers as possible.

Citing ‘Knockoffs Thrive on Alibaba’s Taobao’, Yumiko explained how it’s usually possible to find other people to speak with—in this case, sellers on Taobao—if the company will not cooperate. Reporters can also use public information such as online presentations to see how the company talks about itself.

Yumiko also spoke about her current role as a digital editor and how metrics on articles have to be read in context as business stories don’t always receive the most traffic, and metrics can be distorted by paywalls.

She has, however, been surprised by the continued popularity of longer reports: ‘One thing that we’ve noticed is that a lot of people still read long form stories on mobile and from social media. We’re very proud that our long form writing is still well-received.’

Based in Hong Kong, Yumiko  was formerly Managing Editor for The WSJ’s Japanese edition, former Bureau Chief for The WSJ in Tokyo and Seoul, and former WSJ correspondent in New York.

The JMSC is now welcoming applications to the Master of Journalism (MJ) programme for the 2016–2017 academic year. Click here to find out more and apply.