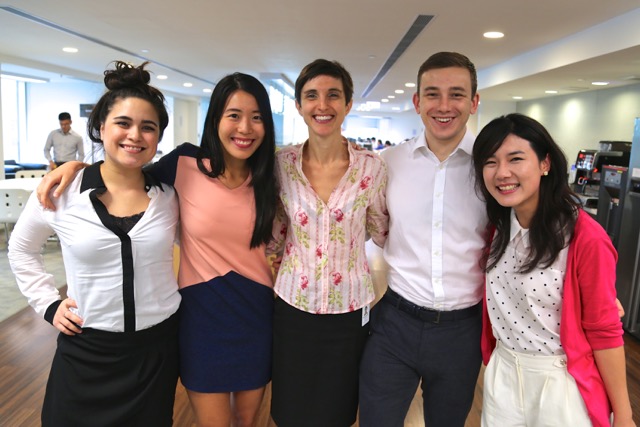 Spending all day surfing social media may not sound like the wisest way to impress your boss, but it’s proven a good career move for three JMSC graduates who have found rewarding jobs working at the digital news agency Storyful.

Sophia Qian Xu, from Shaanxi province, China, graduated from the JMSC in 2012, and said that although she has since become dependent on her laptop and smartphone, she finds the benefits of the job outweigh any digital addiction.

“I get to work with talented journalists from Europe, the States and Asia and learn new things about the Web everyday,” she said. “Plus I get to stay on Facebook, YouTube, Twitter, Weibo and Youku all the time.”

Although the job sounds simple, once the staff identify a useful video or news account, they also have to verify its authenticity before it is distributed to news organisations across the world. It’s a job that requires solid journalism skills, and three out of five of Storyful’s Hong Kong staff are now JMSC graduates.

“It might sound like a cliché, but the basic principles of journalism and media ethics that I was taught at uni help me the most,” Xu said of her work. “When I’m unsure about a story or get stuck on a case, I turn to the basics to find answers.”

Olivia Rosenman, an Australian who graduated from the JMSC in 2013, said she first came to appreciate the importance of social media during digital journalism courses at the JMSC. Working at Storyful has further opened her eyes to its influence.

“I am amazed by the power of Twitter to break news and give people a voice,” she said. “It excites me that these days anyone in the world can be across breaking news for free whereas 20 years ago that breadth of information was reserved for governments and big media organisations.”

Rosenman said she also enjoys the global nature of the job, if not necessarily the destruction and damage inflicted by human nature, and Mother Nature, that she often needs to verify.

“I feel like I learn a lot about the world, getting a better idea of the political and cultural situation and I feel like you learn from everything, even unpleasant things,” she said. “We have to look at a lot of difficult, challenging and harrowing content, and that can be very hard at times, but it is an important part of the job.”

Being first to the news is one of the best parts of the job for Burnett, an American who graduated from the JMSC in 2014. “We’re paid to be on top of breaking news around the world and to be the first to find content from people at the scene, so there’s never a dull moment. The work is intense, but also rewarding,” she said.

“The JMSC taught us to be skeptics when reporting; to question what’s presented before us and to never mistaken what a person says as fact,” Burnett added. “This approach is critical to being a Storyful journalist, where verifying content is at the heart of what we do.”