JMSC gets WHO grant to study cultural effect on risk communication 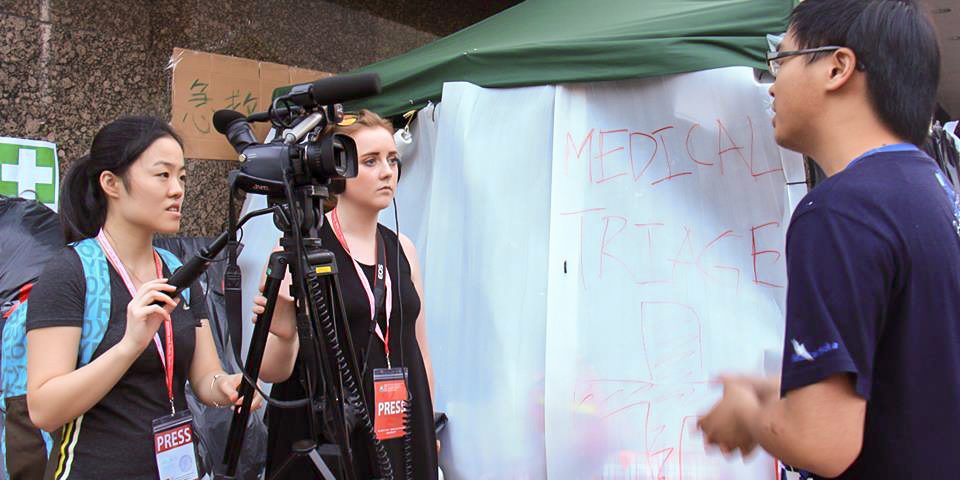 News outlets including the BBC, Al Jazeera, MSNBC, Quartz, the Huffington Post, i24 and Spiegel Online have all carried reports from the MJ’s on the “Occupy Central” movement, and some of the students have  been interviewed for live, on-the-spot coverage of the protests.

Vivienne Zeng, a 27-year-old student from mainland China who reported on the protests alongside an experienced MSNBC reporter, said although she found some aspects of the reporting difficult at first, she soon came to feel “like a real journalist.”

“Matt Walsh (a JMSC video news production lecturer) had told us how to hold our camera steady, but it wasn’t until I had to use it on the ground that I learned how to hold my camera properly and not film people like you are a tourist,” she said. “I saw how to make a video out of the raw footage afterwards and I also had to find interview subjects and approach people, which I was not really good at in the beginning, but it became much easier.”

Francois-Xavier Pasquier, a 26-year-old master of journalism student from France who had videos broadcast by the BBC and Israeli television channel i24, said that that working alongside some of the world’s most experienced journalists while covering the protests had proven an invaluable learning opportunity.

“When we talked with different students covering the protests and we realised how far we had come with our reporting, we were all amazed at what we could get out of it, what we could leverage,” he said. “It was only at this moment that we realised that we could be considered journalists more and more.”

He added that while the press passes, business cards and advice provided by JMSC staff to the students had helped his success in reporting on the protests, one of the greatest lessons he learned was on-the-job training in journalistic ethics.

Although many of the protesters are “the nicest people I have ever met,” Pasquier said, “That was actually the hard part, because you need to report on them with a very objective mind, but it’s hard to be critical when basically there are first aid stations and people mop the street at six o’clock in the morning.”

Click on the links below to explore published work by JMSC master of journalism students.

Carla Gonzalez has reported extensively on the protests for the Ecuadorian Internet publication, El Telegrafo:

Tom Grundy has reported extensively on the protests for many international news organisations, including the BBC, Huffington Post and Quartz:

Lukas Messmer has reported on the protests for many news organisations, Including Al Jazeera, MSNBC and Spiegel Online:

Francois-Xavier Pasquier reported for Israeli TV channel, i24, had his video picked up by the BBC World Service, and has also written extensively about the protests on his Medium site:

Becky Sun has published two photographic blogs on the Victoria & Albert Museum website in the UK.

Cal Wong had a video news report broadcast by CocountsTV

Vivienne Zeng reported on the protests for MSNBC and has received many hits on her YouTube video coverage: