JMSC Students Learn Their Trade in Internships Across the Region

Support JMSC Students and Win Prizes for Yourself and the Centre 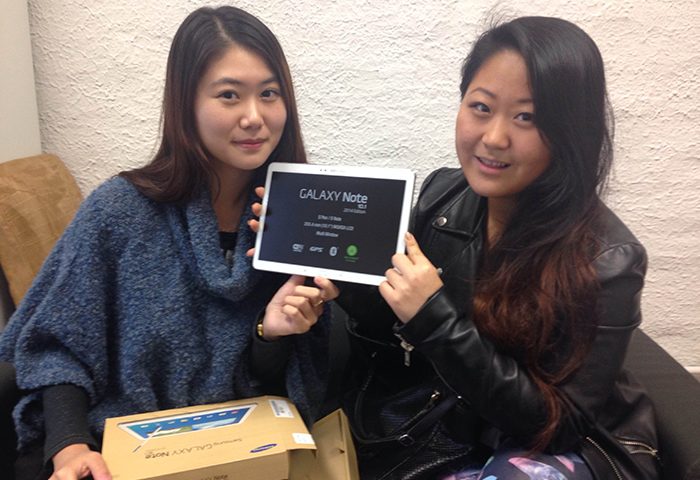 Want to improve the environment and make money too, both for yourself and your journalism school?

Two undergraduate journalism majors at the Journalism and Media Studies Centre are trying to do just that. Stella Ko and Sol Han, both from South Korea, have entered Samsung’s Solve for Tomorrow competition, in which students from across Hong Kong are sharing their ideas on how to improve the city’s environment using technology.

The two have made it through the first stage of the competition, jointly winning a Samsung Galaxy Note 10.1 and HK$4,500 in cash. They are now one of 20 teams competing for the five top slots, each of which comes with more cash and a Samsung Smart TV. The top three and their schools will receive additional prizes from Samsung; the eventual winner will get HK$100,000 in cash and products, and the winner’s school will receive HK$250,000 worth of Samsung products.

Required to create a video showing how their idea would bring about “a greener, smarter Hong Kong,” Ko and Han came up with “smart glass for tomorrow.” “Our proposed product – smart glass – conserves energy by gaging temperature differences between indoor and outdoor environments,” said Han. “If the glass turns a certain color, like red, you’re using too much energy.”

Ko said they drew heavily on their studies at the JMSC to complete the project. “My television news production class really helped a lot. It was challenging because we had to use a Samsung tablet to video record with a tripod and under a short deadline, so the project helped us learn to work under pressure,” she said.

Anyone wanting to support the two students’ project – and the JMSC – can cast their vote on the competition’s website. Voters’ names will be entered into a drawing for a Samsung Galaxy Note 8.0 LTE, and 20 of those will receive the prize. Voting ends on March 17.

At the end of the competition, Samsung will publish the students’ projects in a booklet. Winning entries could become candidates for funding from Samsung’s “Realization Plan.”  “We wanted to raise awareness in a way that could build pressure for change,” said Han.