How I Write – by author and journalist, Andrew Lam 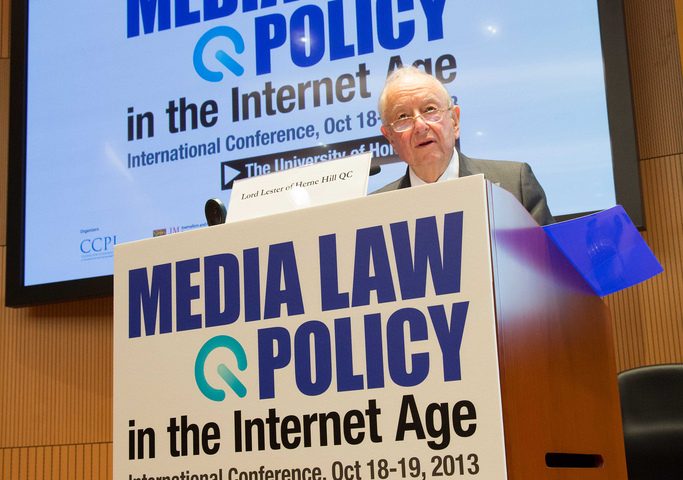 The Internet is going to require new legal approaches to media law, because the old approaches, rooted in traditional law, are being made obsolete by the digital age, a legal expert predicted at a recent conference at The University of Hong Kong.

Common law uses analogies from the past to fashion solutions for the present, and “while that often works well,” the Internet has created new challenges that require a “different way to classify what is going on,” said Andrew Kenyon, a professor at Melbourne Law School and an expert in several areas of media law.

“This is a different form of engagement that is really challenging, but I think in 10 years’ time we will be saying, ‘Hold on,’ we used to try to draw these old analogies (but) it just doesn’t make any sense,” Kenyon said.

He was speaking at the conference on “Media Law & Policy in the Internet Age,”  held October 18-19 and organized by HKU’s Journalism and Media Studies Center, the Centre for Comparative and Public Law, and Media Defense-South East Asia, a network of media defense lawyers in the region. The conference brought together 70 experts from 15 jurisdictions, including three British lords and many top lawyers and academics at the forefront of the debate over the issues – reform of media law, defamation, privacy, free speech and national security – that the digital age has spawned.

Conference participants came to Hong Kong to discuss how what one professor described as the “chaotic environment of expression on the Internet” is altering the legal landscape everywhere.  They heard, among other things, how legal and political developments related to online media in the United Kingdom are worrisome signposts of what might lie ahead for journalists in traditional and online media in Hong Kong.

They also came to exchange ideas about change, and to form alliances to mitigate existing and projected restrictions on the media.

‘A most remarkable occasion’

By all accounts, they succeeded. “I think this has been a most remarkable occasion,” said Lord Lester at one of the conference’s closing panels. Lester, a long-time champion of press freedom and a key architect of recent defamation law reform in the United Kingdom, added: “I have learned a huge amount.”

In an opening keynote speech, Lester had described one of the challenges media defenders sometimes face: the “hijacking” for political purposes of reforms meant to strike a balance between media malpractice and free speech and public access to information.

Lester and others had conceived an overhaul of the UK’s defamation law that removed, in his words, “notorious chilling effects” of previous law while still protecting reputation and privacy rights.

Then the infamous “phone-hacking” by a British newspaper came to light.  Politicians and celebrities pressured the government for statutory media regulation. The resulting Leveson Report proposed several tough new sanctions against the media, which media groups have strongly opposed.

The House of Lords voted to amend the Lester group’s proposed defamation law to coerce the government into implementing the Leveson sanctions by statute. This led to a round of negotiations among political parties, the media and a celebrity-led lobbying group that ended with the creation of a Royal Charter – a roundabout way of giving Leveson-like powers to a regulator without passing new laws.

“This cumbersome process has been condemned across the world,” Lord Lester said in his prepared remarks.  “There is nothing like it in any modern democracy.”

This hijack, he said, “polarized the mutual hostility of bruised politicians and newspaper bruisers. It was a classic case of overkill: burning the house to roast the pig.”

The relevance for Hong Kong

What happens in the UK has relevance for other jurisdictions in the common law world, notably Hong Kong, several conference panelists noted.

Danny Gittings, a lawyer, author and senior director of a law program at HKU SPACE, said that while the Hong Kong judiciary is often positively influenced by what happens overseas, the Hong Kong government has a “nasty habit” of looking elsewhere for the worst possible examples of law and regulation to help formulate its own proposals. He said this penchant would prove relevant if any of the ideas “floating around” in Hong Kong for statutory media regulation end up as legislative proposals.

Speaking at the concluding panel with Lord Lester, Gittings predicted that Hong Kong officials would make the Leveson Report “Exhibit No 1” to support its own position, and that if the Royal Charter compromise goes forward, it would become “Exhibit No. 2.”

(A British court has since rejected a media bid to stop the charter, and the Privy Council has concurred. A higher court battle is pending.)

The Hong Kong judiciary had been criticized earlier in the conference for being substantially behind the international curve in opening its courtrooms to the public and to technological change.

Lord Dyson, who holds the second most senior judicial position in the UK, said the UK grants greater and faster public access to records, permits television cameras in appeals courts, and allows journalists to use new tools in courtrooms that enable them to report stories more quickly. “If you are not doing what we are doing in the UK, then you should,” Lord Dyson said in reference to the Hong Kong courts.

Many conference panelists described the challenges of Internet laws and regulations developing in their own countries, across terrain that is often comparatively new for almost everyone involved.   Participants from China detailed for their western counterparts how private citizens are striving to exploit the power of the Internet while the government struggles to extend its traditional tight control of the media to online communication.

Professor Xu Xun, executive director of a media law research center at the China University of Political Science and Law, cited the case of a teenager in Gansu province who was jailed by local police after he posted a comment casting doubt on their integrity.

His arrest triggered an online uproar, and in the end the teenager was released. The stated reason for his release was misconduct by police, who were then fired.

The basis of the arrest, however, was the decision earlier by China’s highest court and top prosecutor’s office to extend penalties to “rumors” circulated online.

Another panelist, Associate Professor Zheng Wenming of Capital University of Political Science and Law in Beijing, said development of an independent judicial authority in China would be slow in coming, as would changes in its criminal defamation law, due to the “context of the Chinese situation,” which has a “history of putting government on top.”

Experts elsewhere in the region are fighting more outspoken battles against authorities who fear the Internet for its potential to rouse public opinion and challenge their authority.

An expert from the Philippines said that when Internet users there learned of a new cyber law that imposed harsh restrictions, they used the Internet to rally public opinion against it as the country’s high court weighed a constitutional challenge.

Harry Roque, associate professor of the Philippines University College of Law, said the public is now so opposed to the law that the court has delayed a decision because it is “afraid” of public reaction.

The Internet has given people “something they can use to affect public policy,” he said.

Southeast Asia contains particularly difficult challenges to the media because governments devise anti-free speech laws for different political, cultural and religious reasons – and because judges either must go along or do so anyway.

“While systems in the developed nations need fixing on the margins,” said Malik Imtiza Sarwar, a leading human rights lawyer in Malaysia, “the problems in the Asia region are fundamental.”

Doreen Weisenhaus, an associate professor at the JMSC, said that when she and Professor Ying Chan, director of the JMSC, and Professor Simon Young of HKU’s Faculty of Law, were planning the conference, she wondered whether describing it as a “global dialogue” was too ambitious.

“But, no, I think we have accomplished that,” said Weisenhaus, who was the conference’s academic and program director.   The most important resources the conference participants now have are each other, she said. “Change can happen with one person starting it…It can only continue with the cooperation of everyone.”