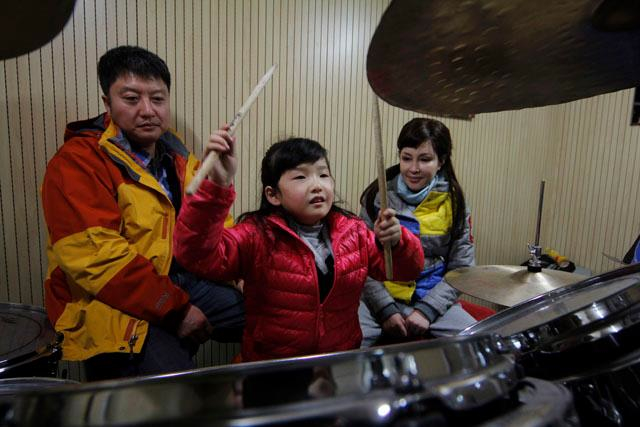 Deqi’s parents watch her practice at Nine Beats music school in Tianjin, China, in a scene from Vincent Du’s documentary.

The documentary tells the story of Deqi, a seven-year-old Chinese girl who is learning how to drum and play the guitar at the prestigious Nine Beats music school in Tianjin, China.

The film follows Deqi and her family from the school, where she practices 10 hours a day on Saturdays and Sundays, to an international percussion competition in Italy.

Viewfinder is a new documentary series that aims to promote independent filmmakers who “focus on the power of storytelling to bring about a deeper insight into the impact of global events on local communities.” China’s Little Rock Star is the first film of the program’s eight-part Asia series.

Vincent Du worked as a freelance photographer in China prior to joining the JMSC’s Master of Journalism programme, which he completed in 2011. His photographs have appeared in Time, Fortune, the New York Times, the Wall Street Journal, Metro Express, and the Bohai Morning Post. At the JMSC, he started filmmaking in the documentary courses taught by noted filmmaker Nancy Tong. After graduating from the JMSC, he went on to obtain a master’s degree in screen documentary from Goldsmiths College, University of London, in 2012.

[Click on the video below to watch Vincent Du (MJ, 2011) discuss his new documentary.]