JMSC Students Help Spread Ideas Around the World at TEDxVictoriaHarbour 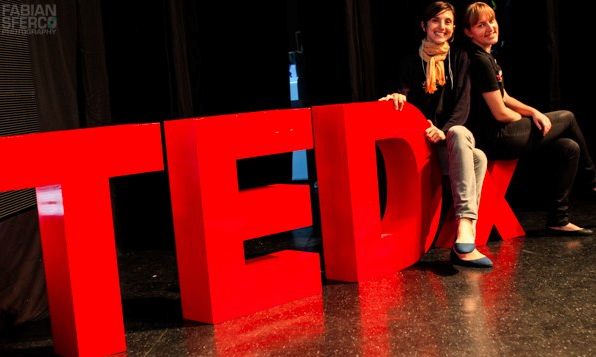 Olivia Rosenman (MJ, 2013) and Sophie Brown (MJ, 2013) at TEDxVictoriaHarbor where they filmed the talks with three other JMSC students.

Five JMSC students recently got the chance to work on an international project that has an audience in the millions when they interned at TEDxVictoriaHarbour, an annual travel and tourism conference in Hong Kong. The conference operates under license from TED, a nonprofit that promotes such events around the world.

Tai and Schjerven worked as still photographers during the conference. Zhang, Brown and Rosenman filmed the speaker’s presentations and are currently editing the footage for publication online. The talks will be uploaded over the summer to the official TEDx Youtube account, which regularly records tens of millions of views.

One of the core principles of the JMSC is to provide students with opportunities to put the digital and technical skills they are learning in the classroom into practice in real-world, professional work environments.

Zhang, who is from Shanghai, said that opportunities like this were one of the reasons she chose to come to the JMSC. “We learn a lot in the classroom, then we learn a lot more by going out and doing stuff professionals do, totally hands on,” she said. “It gives us a great combination of theory and practice. And the internships that the JMSC can provide are pretty impressive.”

The internships allow students to connect with working members of the international media and to receive training from them. One of the speakers at the conference was Dean Head, an Australian filmmaker whose documentaries have been on the Discovery Channel and National Geographic. “He helped us set up and took the time to advise us on lighting and how to get the best shots,” said Rosenman, who is also from Australia.