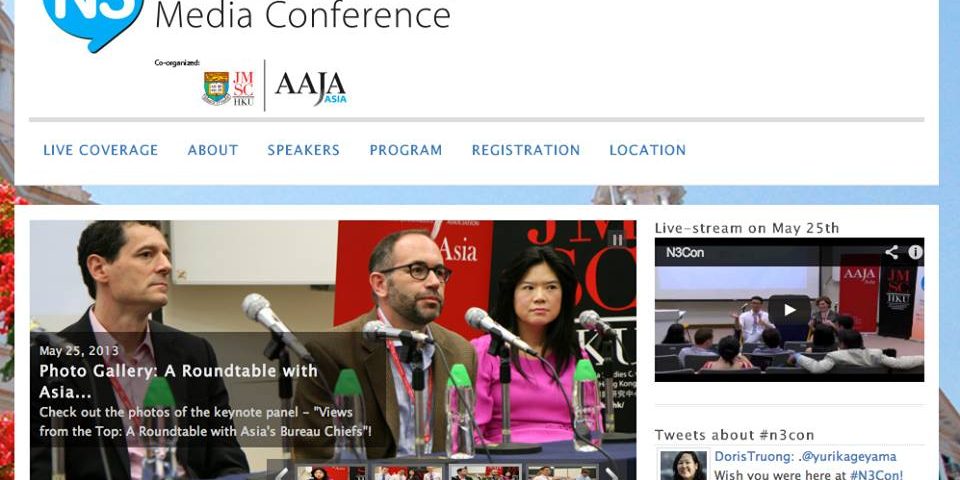 When professional journalists from all over Asia and North America arrived at Hong Kong University for the New.Now.Next Media Conference (N3Con) last weekend, they were greeted by a press corps of JMSC students.

The N3Con team – which consisted of JMSC Bachelor of Journalism, Master of Journalism and exchange students – covered the conference in real time, rising to the challenge of reporting, shooting, producing, writing, and broadcasting stories across a range of media for some of the leading journalists in Asia, including bureau chiefs of the Wall Street Journal, Associated Press, and Voice of America.

The conference was co-organized by the the Asia chapter of the Asian-American Journalists Association (AAJA) and the JMSC. It took place on May 24, 25 and 26, and brought together media experts, academics, and journalists covering the region. They discussed the year’s biggest stories, the current state of journalism in Asia, and the most recent developments in media and technology.

The N3Con team covered all of it live.

The videos, interviews, photographs, articles, and multimedia reports the students produced allowed people who were not able to attend the conference in person to experience it online through a website set up to cover the event. The coverage also consisted of live blogging and video streaming, taking photographs with Instagram, managing the AAJA-Asia Twitter account, using Storify to organize social media to tell a story; and shooting, editing, and uploading videos to the JMSC Youtube channel.

Sophie Brown (MJ, 2013), one of the participants on the N3Con coverage team, said that covering so many veteran journalists was a bit intimidating. “You want to make sure that you do a good job, and quote them accurately, because you know that what you write or produce is most likely going to be seen by them.” It’s more pressure than writing for a general audience, she said.

Brown credited the JMSC for providing her with the skills required to report on such a large event.

“It was like literally putting into practice everything I had ever learned in class,” she said. “What was really amazing about it was the quality of work we were able to do in such a short amount of time. It showed me how prepared JMSC graduates are, and how easily they would be able to start their own production company if they wanted to. We worked so well together and everyone had their own strengths and we made a really impressive news site.”

[Click on the video below to meet the N3Con Coverage Team.]

Wendy Tang, Digital Editor at Asia Society Hong Kong Center and AAJA-Asia Chapter Secretary, said that she was impressed by the student’s abilities.

“Any live coverage is not easy because you want to get it up quickly and at the same time accurately,” Tang said. “The students did a great job doing that. And they stayed at the conference late until their work was finished, which is what you have to do in the news business. I am really proud of them.”

This is the third year that AAJA-Asia and the JMSC teamed up to organize a journalism conference in Hong Kong. “We really do owe much of the success of this conference to the … support of the JMSC staff and [students],” said Ramy Inocencio, Asia Business Analyst for CNN International and Vice President of AAJA-Asia.