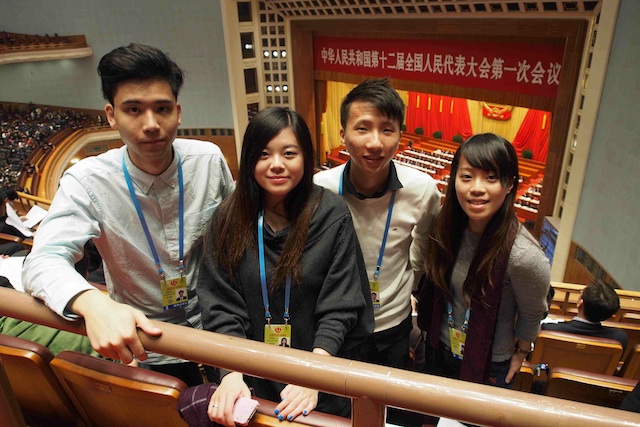 The four final-year students were in Beijing between March 1 and 8 for the sessions of China’s National People’s Congress (NPC) and the National Committee of Chinese People’s Political Consultative Conference (CPPCC).

James Chan Kin-sing and Nicholas Leung Ho-yin, wrote stories for the Hong Kong Economic Times, one of the top financial newspapers in the city, while Tracy Tong Wing-man and Yuki Cheung Ting worked for the South China Morning Post, the city’s most widely-circulated English-language newspaper.

“On one assignment, I was asked to garner opinion on the change of leadership”, said Cheung. “I took the initiative to approach delegates of different sectors – like business, law, agriculture, etc. – to build a more balanced summary of quotes … This experience is unique (in) that I had interactions with people more than just Hong Kong politicians”.

Tong said she panicked at first at the thought of getting comments in  a venue with more than 5000 people coming out of an auditorium at the same time. “Luckily, I started to get used to the style of the conferences after a few days”, she said.

Leung learned of the difficulties reporters encounter while covering events like this on the mainland. He recalled his experience covering a panel discussion of NPC delegates from Shanxi Province.

“I approached the front door of the destination but was then stopped by the police, even (though) I have shown my reporter pass,” he said. “The police told me to enter from the back door, (for) which I needed to take a lengthy detour and walked for 30 minutes”. Reporters, he concluded, are “not privileged most of the time in mainland China”.

This is the fifth time trips for journalists-to-be to the NPC and CPPCC have been funded by the Journalism Education Foundation Hong Kong Limited, a non-profit organization that seeks to raise the standards of journalism in Hong Kong.