Journalism’s Future as Bright as Ever says Media Expert 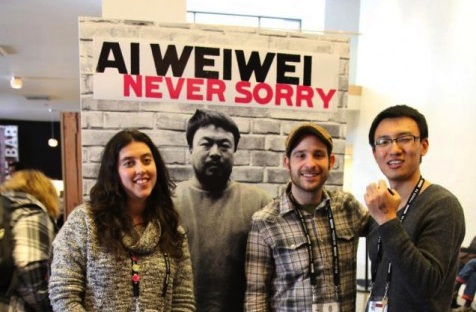 Director Alison Klayman speaking at the JMSC after a screening of her documentary Never Sorry.

“If you are getting your message out in only one way or in a more direct political way, it is easier to disregard it”, said Alison Klayman, director of Never Sorry, a documentary about Chinese activist and artist Ai Weiwei. “But when it comes with art, people can be influenced without even realizing it”.

Klayman spoke at the University of Hong Kong during a screening and discussion of Never Sorry sponsored by the JMSC. The subject of the film, Ai, is famous for making political statements with his art.

Anyone looking at Ai’s Remembering art installation, a wall of 9,000 backpacks that alluded to the children who were killed when poorly constructed school buildings collapsed during the 2008 Sichuan earthquake, “thinks about human dignity in a different way”, Klayman said.

The backpacks were arranged to spell out the words of the mother of one of the victims, a seven-year-old girl. “For all the sentences he could pick to spell in the backpacks, it was, ‘She Lived Happily On This Earth For Seven Years’, which is actually quite mild and open to many interpretations and emotions”, Klayman said.

Never Sorry, which won the Special Jury Prize at the Sundance film festival last year, has also been shown at the Foreign Correspondents Club of China in Beijing and at the 2012 Hong Kong Asian Film Festival.

Klayman said that through her film she has met dozens of artists, activists and filmmakers who were greatly influenced by Ai Weiwei.

“He’s an amazing and inspirational figure for me”, said Matt Ma (MJ, 2009), who worked as an associate producer on the film. “And a really interesting figure in the context of changing China”.

“He’s not from an ordinary Chinese family”, Ma said. “He’s from a family of one of the highest Communist Party members. He doesn’t have to do the things he does, but he puts his life on the line for the things he believes in. And the lesson I think we all learn from him is to speak up for yourself and use the tools and the things that you are good at to make a difference in this world”.

The whole process of making the documentary, and seeing how people react to Ai Weiwei, has been proof, Klayman said, that “the idea that art reaches people – and I would include film and any kind of creative expression – is not just a nice idea; it does matter.”