Diary of an Intern at Phuketwan in Thailand 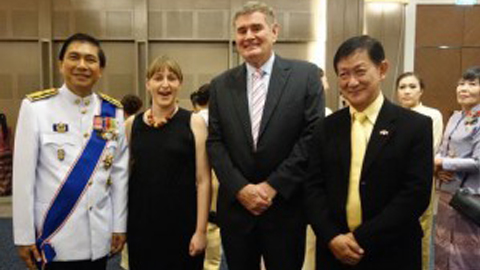 Sophie Brown is a Master of Journalism student from Australia. She is in Thailand over the winter break working as an intern at Phuketwan, a web site that covers news, tourism, real estate, and nightlife on the island of Phuket.

Here is her summary of the experience so far:

It’s my first day at Phuketwan and I’m already meeting the movers and shakers of the island. The new governor is hosting a gala evening for Phuket’s dignitaries in honour of King Bhumiphol Adulyadej’s 85th Birthday.

I attend with our Thai reporter, Chutima Sidasathian (known as Khun Oi). Among the guests I meet are Phuket’s governor and the honorary consuls of Australia and Denmark. The women at the event look stunning, wearing traditional Thai silk dresses and elaborate hairstyles.

The photos I take of the event appear as a photo gallery on Phuketwan’s website. (They may be seen here.)

Phuket media outside the house where a Hungarian man was murdered. (photo: Sophie Brown)

The other adventure of the week unfolds when police find the house where a Hungarian citizen murdered one of his co-nationals over a botched business deal before dumping his body in the nearby jungle.

The media are given access to the crime scene as forensic police dust for prints and check for blood stains. There’s a lot more waiting around than I expected, but it’s still an exciting experience.

[Brown’s article about the search for the murder suspect may be read here.]

Khun Oi is away this week and I’m struggling to find stories without her. So much here depends on speaking Thai and having good sources, neither of which are skills I possess.

The big story I am able to write about is the disappearance of an American man who was due to return to the States in early December but didn’t show up for his flight. His mother has flown to Phuket from Los Angeles, desperate for information about her son.

I find it difficult to detach from the situation. It’s not easy to see a mother hold up photographs of her missing son before a crowd of journalists and flashing cameras in a police station.

[The article Brown wrote about Lynne Bean’s offer of a reward for information about her son may be read here.]

For International Anti-Corruption Day, I interview anti-corruption campaigners and experts about corruption in Phuket. I’m delighted to see my story prompt readers to share their own experiences.

My main task this week is to conduct interviews for our “Best of Phuket 2012” series.

The managing director of a new five-star resort on a nearby island gives me a tour of the facilities.

I interview Hong Kong’s national triathlon coach and one of their triathletes, both of whom are staying at an elite sports resort for training.

Late on Thursday night after I’ve gone to bed, I hear a phone ring. An AirBerlin plane has made an emergency landing at Phuket Airport.

I call the airline’s head office in Berlin. Their media staff is quick to respond but they don’t have any more information than we do at the moment, and I know that when they do have further details, I’ll be a secondary priority for them behind the news agencies and big German papers.

I call the hotel where we’ve learned the stranded passengers from the flight will be staying tonight. We drive to the hotel and interview some of the passengers.

[Brown’s article on the emergency landing of AirBerlin’s Airbus A330 may be read here.]

The other English-language Phuket media outlets start to catch up and write their own stories. One of the reports has some serious inaccuracies, the most obvious one an identification of most of the passengers as Australians. In fact, most were Germans.

I monitor the German press to see their take on the news, and am alarmed to read the first story, then two more, refer to the inaccurate article of our competitor. Only one of the German newspapers includes the erroneous detail that the passengers were Australians, but I’m still shocked. These are large, established newspapers that should know better about checking sources.

After spending my Christmas vacation kayaking and rock climbing along the spectacular coast near Krabi, I return to our office in Phuket, anxious to know what stories have broken while I’ve been gone.

“You missed the biggest news!” are Khun Oi’s first words as I walk in the door. She was right. Seventy-three members of the Rohingya ethnic group had landed in Phuket earlier that day after fleeing Burma.  They were heading for Malaysia, but their small boat was unable to make the full journey. I prepare Khun Oi’s photos of the refugees in Photoshop for uploading to the website.

This week I finish writing my final story in the “Best of Phuket 2012” series. The judges chose Phuket’s famous ladyboy song-and-dance show, Simon Cabaret, as business of the year.

I spoke to the vice president of Simon Cabaret, who has taken over much of the business from his parents. He grew up with the shows, but as I write the story I can’t help but wish I’d had a chance to speak with his mother, who has been the guardian of the ladyboys since the shows first started 20 years ago. The man knows all about the business, but I’m missing the detailed anecdotes I’m looking for.

On Thursday evening, just as we’re getting ready for bed, Khun Oi’s phone rings. Dozens of tuk-tuk drivers have blocked the street outside a police station and are protesting against the increasing number of Russian tourism operators who, as the locals see it, are stealing their business without investing any of the profits into the local economy.

We quickly jump in the car and drive to the scene. I’m supposed to be there as an observer, but suddenly I find myself the centre of attention as the only foreigner.

At one point, a man walks over to us and starts yelling at me in Thai. We realise he thinks I’m Russian!  Khun Oi and I explain to him that I’m Australian and a journalist. We eventually convince him to let us carry on with the job, but it’s an unsettling feeling.

It’s a very small operation here. There are three Thai reporters (a new reporter joined us just before New Year’s) and one editor. We’re up against other English-language news sites that have 30 to 50 staff, so it can be a lot of hard work to stay ahead.

I’m constantly scanning social media for story ideas and to see what our competitors are doing. But by far the majority of ideas for stories come from our reporters’ sources, so we rely on having good relationships with people, especially with police officers and public officials.

I’m cautious about making judgements after such a short time here, but  I have noticed that there’s not the same sense of public accountability here that I’m used to in Australia.

For example, the government stopped publishing Phuket’s road accident figures in 2012 (people speculate that the high figures were seen as bad for Phuket’s image). But without formal statistics and reports, so much of finding a good story depends on how willing public officials are to share information with journalists.

There are also major problems with transport in Phuket. The roads are often clogged and the taxis and tuk-tuks are expensive. There’s next to no public transport, and attempts by the most determined public officials to establish a public system have been thwarted by the mafia who control the taxi networks.

Disputes over land, especially the highly valuable beachfront properties, are another administrative headache for the island.

One of our Thai reporters likes to say that Thailand has perfect weather, perfect food, perfect people, perfect nature, but there are too many selfish people. It’s her way of saying that greed and corruption is ruining what should be an idyllic place.

In 2012, over 4 million overseas visitors came to Phuket. Most of them would not experience the problems beyond being overcharged for a taxi or having to walk through a maze of resorts to reach the beach from their hotel room. But Phuket could be so much better.