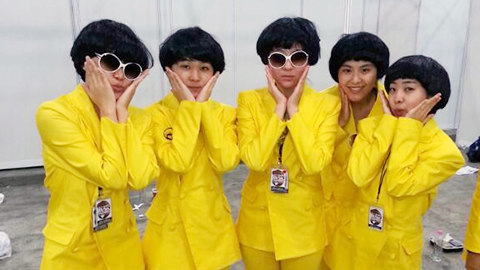 Juwon Park (BJ, 2016), middle, with other HKU students who volunteered to dance with PSY during the Mnet Asian Music Awards.

The performance was streamed online and broadcast to 85 countries, targeting an audience of over 2 billion worldwide.

The BJs were among a hundred students who signed up to be PSY’s back-up dancers on the Korean music awards show after CJ Entertainment, which organizes the event, contacted the HKU Korean Student Association to ask for volunteers.

Each Korean student who volunteered was asked to bring a foreign student to the Exhibition Centre with her.

During a rehearsal before the performance, one of the BJs was asked to try on a yellow suit for PSY.

“I put on the outfit, with the leggings and black mushroom hair wig, and was led into a small room”, said Juwon Park. “And there was PSY. He was sitting there in his white shirt. They had me stand next to a girl who had on yellow slacks and asked PSY which he liked better. He said he liked the leggings I was wearing better so all the dancers had to put on leggings”.

The Gangnam Style music video has been viewed over 900 million times, and is the most-liked and most-viewed video in YouTube history. PSY won awards for Song of the Year, Best Music Video, Best Solo Dance Performance and Global Favourite Artist.

Volunteers dance and take pictures on the red carpet waiting for their turn to perform at the Mnet Asian Music Awards. (photo: Sol Han)

MAMA is the largest music awards show in Asia. This year was the third time the event has been held outside of South Korea.

“We got dressed and then we waited and waited and waited”, said Sol Han. “We were the last performance. Finally it’s our turn and the music comes on and there is this giant screen that turns into thousands of youtube videos of people dancing Gangnam Style all over the world. We lined up and the whole place got dark and we got on stage”.

“And then a white curtain dropped”, said Park. “And then the whole place became super bright and we danced the Gangnam Style with PSY. We only danced for like 20 seconds but it was the highlight, the climax of the show”.

After the show, the students hung out backstage, took pictures, mingled with celebrities and PSY let all of the volunteers keep their costumes at the end of the night.

“I might wear it for the end of year party just for fun, or just keep it for the next Halloween,” Han said, “if people don’t forget about PSY by then”.

A full video of PSY’s 2012 MAMA performance may be seen here (the students appear onstage around the 25:30 mark).