Diary of an Intern at The Nepali Times 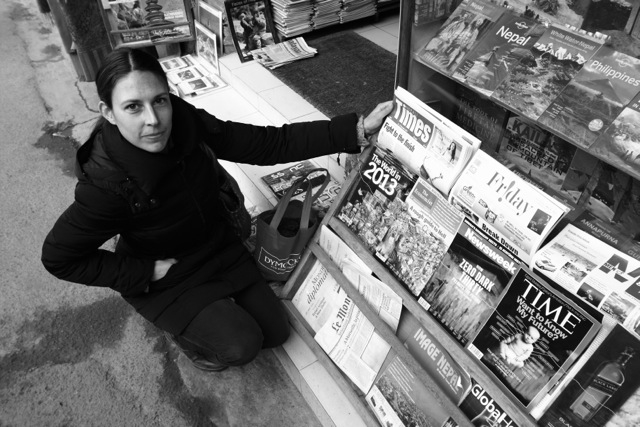 Anna-Karin Ernstson Lampou (MJ, 2013) holding a copy of the Nepali Times at a newsstand in Kathmandu, Nepal.

Anna-Karin Lampou (MJ, 2013) holding a copy of the Nepali Times at a newsstand in Kathmandu, Nepal.

Anna-Karin Lampou, a Master of Journalism student from Sweden, is interning at the Nepali Times in Kathmandu, Nepal for six weeks over winter break.

Here is what it was like for her last week:

Sunday – the first day of my second week here in Nepal.

I’m getting used to the noisy, dusty, and polluted streets of Kathmandu and starting to see its beauty.

What is less easy to get used to is the constant lack of electricity or an Internet connection, which are crucial for writing stories and doing research. Somehow, Kathmandu’s papers still come out, thanks to equal doses of passion and backup power.

We’re having our power cut for about twelve hours a day now due to Nepal’s insufficient energy supply. In order to see some progress and development, I think it’s really in the interest of the nation to take advantage of its rich water resources.

I attended a human rights conference this morning. Because Nepal is still politically unstable following the civil war, which resulted in the end of a 240-year old monarchy and the establishment of a federal democratic republic in 2008, it’s important for the country to come to terms with its past.

So far, no one has been held accountable for what happened during the decade-long conflict and people are calling for the establishment of a Truth and Reconciliation Commission.

I won’t be reporting on the conference itself, but I have had the opportunity to talk to people working for human rights at the grassroots level. The plan is to head out near the end of my stay to one of the districts where an organization trains “human rights defenders” to support the civil society.

I’m keeping my fingers crossed I’ll be able to fit it in.

In the afternoon I met with the editor-in-chief to discuss story ideas. His thoughts and advice are invaluable when pitching a story.

Before I arrived in Nepal I had a long list of topics in mind, but it’s one thing to sit in another part of the world and brainstorm some ideas, and another to actually be here and write for a paper which has covered almost everything already, from all sorts of angles.  What’s new for me might be old news for Nepal, so I’m trying to find a balance between my interests and stories with newsworthy angles.

Since the Nepali Times is a weekly newspaper, its articles are more in-depth, like feature stories, and are able to take the reader further than the fast hard news of a daily paper.

It’s a motivating challenge to apply what we’ve learned in class to actual stories going to print.

Monday – I’m writing a story on how three of the  Nordic countries – Norway, Finland and Denmark – make up the second-largest bilateral donor to Nepal.

A quarter of Nepal’s GNP comes from foreign donors, so I thought it would be interesting to see how the donors perceive the future development of the country. I’m also investigating why Sweden, the largest Nordic country, is not present in Nepal, while the others have had such a strong presence here for decades.

Last week, I interviewed the Finnish ambassador about foreign aid.  Today I went to the Norwegian embassy for more interviews. I think it’ll make a good story.

Tuesday – Christmas is coming and we’re doing a Christmas special on bakeries and chocolate. The editor sent me to meet a woman who makes homemade chocolate in Kathmandu’s only ’chocolate factory’. Yummy 😉

[Lampou’s article on Kathmandu’s Christmas chocolate may be read here.]

In the afternoon I went to Gopalkrishna Gandhi’s talk about leadership in South Asia. It was a thoughtful speech by the Mahathma’s grandson.

Wednesday – I met the Danish ambassador to conduct the last interview for the Nordic donor story.

Once again it was pretty clear from the interview that the Nordic countries stand strongly for democracy, focusing on social sectors to strengthen national institutions and – at the government’s behest – to increase investment in infrastructure, energy and growth.

Thursday – Today is the big deadline day as the paper goes to print in the afternoon. Can’t wait to see my byline in Friday’s paper!

Thursdays are very dynamic in the office. It’s a small team so the editor, reporters, and designer work closely together with editing, proofreading, and final cuts.

Apart from some proofreading, I spent most of the day writing my story, transcribing the interviews (which takes ages) and doing some other research.

Everyone is competing against the electric power outage that can hit anytime. Ctrl-S (to save our work on the computer) quickly becomes a mantra.

Friday – I finally got a hold of Nepal’s foreign aid division for my story on Nordic aid.

I got a driver to take me through the tight security controls at the Ministry of Finance for an interview with the chief of foreign aid. Like many other people I talked to, he had hope for Nepal’s future, but emphasized some crucial steps that Nepal has to take in order to reach its development targets.

It’s such a great opportunity to be here and meet all of these people who share their viewpoints on Nepal.

[Lampou’s story on Nordic aid to Nepal may be read here.]