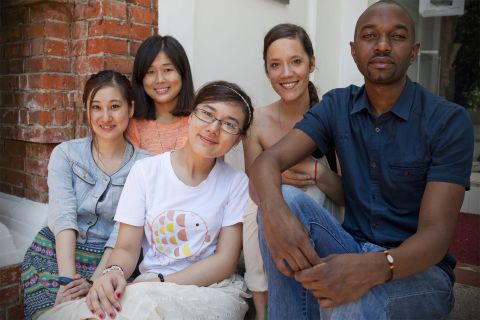 Winners of Master of Journalism scholarships have had great success in getting their work published this year.

Sanday Chongo Kabange of Zambia was among 13 students to receive a scholarship this year. The scholarships are given to talented students who would otherwise have difficulty funding their studies.

Kabange, one of several recipients of a South China Morning Post-Wah Kiu Yat Po scholarship, was already a journalist before he enrolled at the JMSC.

He has continued to file stories to the African media during the year, and one of these won the award conferred by the Republic of Zambia Ministry of Health, for the best reporting on malaria by Zambian journalists and media practitioners.

Kabange said he researched the story in Zambia before arriving in Hong Kong, but wrote it once he was here.

In April, he was honored at a special ceremony, presided over by HKU Vice Chancellor Lap-chee Tsui, to congratulate students for their achievements outside the university.

“I have also been influential in the coverage of news in Zambia through my tweets and posts on social media,” Kabange said. “At least 90% of the information I tweet or post is re-published or broadcast in major newspapers and websites in Zambia. This is because of my strong connections and the experience I have gained while on the MJ programme.”

Yu has been doing a continuous internship at the Chinese-language blog of the Vancouver Sun since last October. So far, she has published 17 articles for the blog.

She has also been working on the Yahoo HK/JMSC experiential learning project, which required her and other team members to develop six video programmes that will be shown on Yahoo HK’s platform sometime in August or September this year.

Lai worked as an editorial intern at  CNN.com International and the Phnom Penh Post in Cambodia during the course of her studies at the JMSC.

“One of the highlights was taking the Literary Journalism course,” said Lai. “The fictional storytelling devices I learned enabled me to write about my real-life experiences in a way I was previously unable to.”

Tse said that having her work at RTHK was one of the highlights of her MJ year.

“I produced two audio news packages for RTHK in my second semester,” said Tse. “The audience called in to the programme and expressed their views on the ‘Occupy Central‘ story my teammate and I produced. I was excited to hear them discussing the issue, since this is what journalism is about — giving voices to people and allowing people the chance to participate in debate.”

“The support of my scholarship provider enabled me to learn about and become inspired by the big picture of the media industry worldwide,” Tse said. “I am now better prepared to work in the fast-changing and vibrant digital environment, thanks to all the skills I have learnt here.”

Hua Lu, a mainland student who received a Hong Kong University Graduate Association Journalism Fund scholarship, worked as an investigative journalist for the Guangzhou-based newspaper Southern Metropolis Daily prior to studying at the JMSC.

“Environmental Communication and Reporting & Writing are the courses that have impressed me most,” Hua said. “As I previously worked in print, these two courses helped me to rethink my writing and reporting experience. I am on course to get the Science, Health and Environmental Reporting Certificate offered by the JMSC which I hope will be my future career direction.”

Hua put her studies to good use during her winter internship. “I interned as assistant editor in the Guangzhou-based Southern Weekend,” she said.  “I was mainly in charge of editing environmental news, which allowed me to use the knowledge I learned at the JMSC.”