Ruby Yang is a noted Chinese-American filmmaker whose work in documentary and dramatic film has earned her an Academy Award, two further Academy nominations, Emmy nominations, and numerous other international awards. 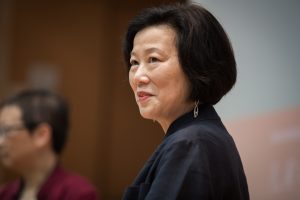 Ruby Yang is an Adjunct Professor at the Journalism and Media Studies Centre. She is a noted Chinese-American filmmaker whose work in documentary and dramatic film has earned her an Academy Award, two further Academy nominations, Emmy nominations, and numerous other international awards including the Alfred I. duPont-Columbia Journalism Award, and the Global Health Council Media Award.

In addition to producing and editing numerous documentaries and feature films, Ruby co-founded the Chang Ai Media Project in 2003, which promotes public health in China. Chang Ai’s trilogy of short documentary films about modern China, all directed by Ruby, include The Blood of Yingzhou District, which won an Oscar in 2007; The Warriors of Qiugang, which received an Academy nomination for best documentary short in 2011; and Tongzhi in Love, which was short-listed in the same category in 2008. The Wall Street Journal called her 2014 documentary My Voice, My Life one of the “five most essential films” to come out of Hong Kong that year. Her latest documentary “In Search of Perfect Consonance” just held its premiere in June 2016.

As Series Editor for Bill Moyers’ Becoming American – the Chinese Experience (PBS, March 2003), Ruby supervised editing for the entire series, which received four Emmy nominations. The New York Times called it “a model documentary that gets almost everything right.”

Ruby is a member of the Directors Guild of America and the Academy of Motion Picture Arts and Sciences.

From 2015-2019, she headed the Hong Kong Documentary Initiative at HKU, aiming to nurture the next generation of documentary filmmakers in the region.