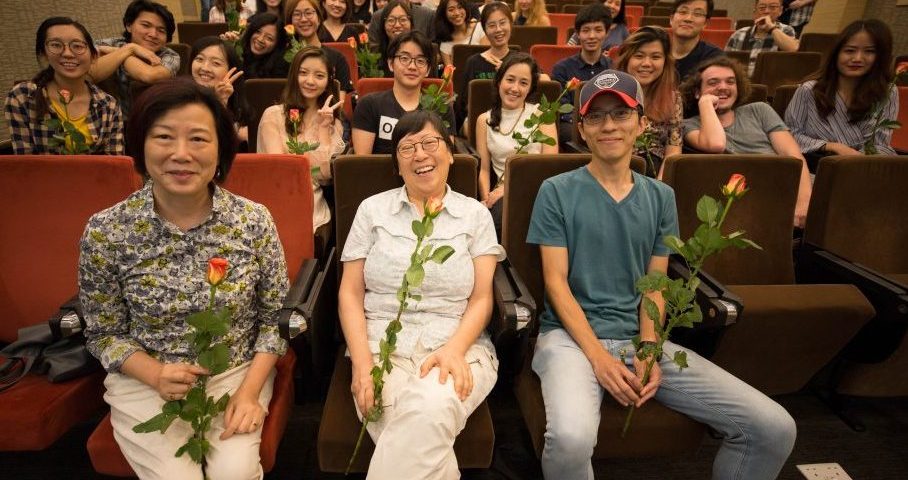 Identity issues in Hong Kong were the subject of this year’s documentaries produced by journalism postgraduates at the University of Hong Kong.

Four documentaries, each lasting around 15 minutes, showed the stories of a male ballet dancer, a Cantonese-speaking Indian stand-up comedian, a teacher moonlighting as a DJ, and the stresses of life in student residences at the university.

“They are all different but they are all about identity,“ said Ruby Yang, the Oscar-winning director who taught the course alongside fellow director Nancy Tong.

Rongrong Huang, a Master of Journalism student from China, was fascinated by the documentary focusing on university hall culture.

At the University of Hong Kong, students living at residential halls have to take an active part in sports or cultural activities. Otherwise, they may be denied a place and are forced to fend for themselves often paying high rent for a room off campus.

During the production of the documentaries, students learned more about local language and culture as well.

Taylor Niu, the director of The Comedian, a documentary about local stand-up comedian Vivek Mahbubani, said she understood more about Hong Kong’s local culture after editing the film.

A third-generation Indian immigrant, Mahbubani is now a famous Cantonese-speaking comedian and represents Hong Kong culture in other countries. The Comedian shows Mahbubani’s life journey, including a difficult childhood growing up in Hong Kong. It ends on a positive note as the documentary shows Mahbubani playing a part in promoting the integration of ethnic minorities.

“I couldn’t understand Cantonese at all before. After I edited this documentary, I could get the comedian’s jokes,” Niu said.

“I also found that Indians face discrimination in Hong Kong after research and pre-interviews. It is just like black people [African-Americans] in America.”

The students also said they learned how to work together as a team through the production process.

“At the beginning, the storyline and the logic were not clear. We were not sure what to do,” said Pamela Lin, another student who worked on The Comedian.

“But Nancy [Tong], our instructor, gave us directions on how to tell the story and link the parts together. We were inspired and able to make decisions,” she said.

“They worked overnight. Then another student came in and took over. This kind of collaboration is really encouraging,” Nancy Tong said.

Yiduan Wu is a student in the Master of Journalism programme at the Journalism and Media Studies Centre.

Vivek Mahbubani is a third-generation Indian immigrant living in Hong Kong. He is now well-known as a Cantonese comedian and has performed in China, Macau, Singapore, Malaysia, Manila, Bangkok, Sri Lanka, India, and Australia.

Mcgill experienced life in Wei Lun hall at the University of Hong Kong where she followed residents as they took part in dance competitions, drama shows and constitutional meetings taking place after midnight discovering Hong Kong’s very own version of The Hunger Games.

A true story about one of the few male ballet dancers in Hong Kong and the path he underwent dealing with pain, injuries and bitterness in pursuing his passion.

The story of a teacher who moonlights as a DJ in Shenzhen. As a teacher, she needs to control her class and appear calm and composed. As a DJ, she is free and rebellious. The documentary follows her journey as she tests the market on the Mainland where there is more money and examines the challenges she faces making independent music in Hong Kong.