From the JMSC to Bloomberg: three alumni tell their stories 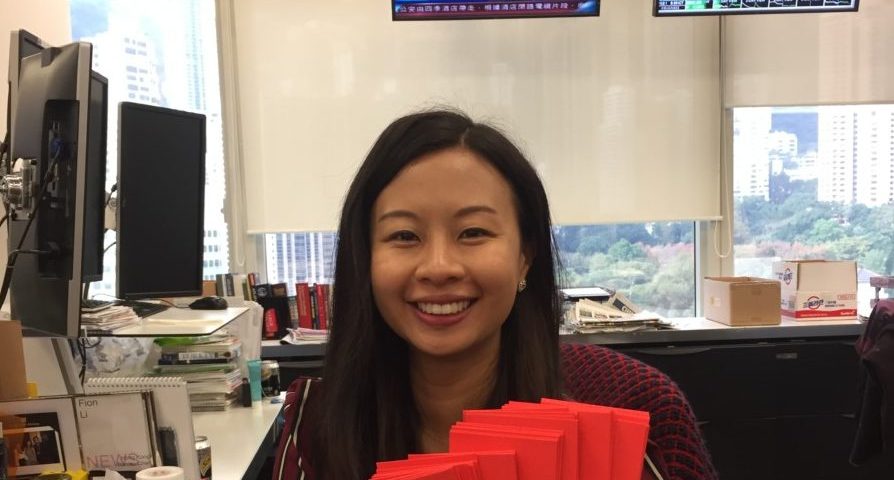 With graduation looming in the not too distant future, JMSC students are vying to land their dream jobs when they leave. Bloomberg, a financial software, data and media company, is one place where many would like to kick off their careers. Three JMSC alumni working at the company in Hong Kong tell their stories:

When Fion Li took up her position as Hong Kong bureau chief at Bloomberg in 2016, she became the first Hongkonger and youngest person ever to lead the local editorial operation.

“I think I was very fortunate that I got the right job at the right time,” said Li. “There are many significant events in Hong Kong this year, like the chief executive election and the 20th anniversary of the city’s handover to China.”

Li’s knowledge, expertise and language skills are what the bureau needs during this critical year. She started her Bachelor of Journalism (BJ) degree in 2004, just as the city was recovering from the previous year’s outbreak of Severe Acute Respiratory Syndrome (SARS).

“I thought of journalism because of SARS,” said Li. “I was in sixth form at that time. I saw the news about people dying every day and I was scared. Some medical staff did not have enough equipment, but because of journalists, they managed to get coverage and public support, so at last they got sufficient gear to protect themselves. I realised that is something I want to do.”

Being one of the “Magic 20” (a term coined by Professor Ying Chan, the founding director of the JMSC, to describe the first BJ cohort), Li liked the flexibility of the programme as well as its way of teaching students how to learn and be open-minded. “I am still very curious about the world. This is what the JMSC taught me,” she said.

Li’s overarching memory from her time at the JMSC was the cohesiveness of the class—everyone bonded tightly together. “I always called it a second home. Your youth should be about smiling and crying … we all did this together at the JMSC.”

Education may help people a lot in finding a job, yet, life stories and experiences are also important in guiding them to a job they love.

The JMSC shaped Li’s career path by providing internship opportunities and networking connections. She did four internships over the course of her studies and said that the experiences helped to broaden her perspective of real world journalism. “People think practical means camera; no, it means opening up your mind,” she said.

After graduating, Li worked as a news assistant at Reuters before joining Bloomberg. It was at this time that she started to like financial news and became certain that it would be something that she wanted to spend her life on.

“The focus on financial news doesn’t really restrict your reporting and we define it really broadly at Bloomberg. It gives you a way to look at the world from a macro perspective.”

Li advises students to stay curious all the time and learn as much as they can. “When you get into journalism, you realise that you can never learn enough,” she said. “And don’t define yourself. It’s better to know about a wide range of formats and subjects because in 2017 journalists do everything.”

“I was 22 years old at that time and I was thinking about what I wanted to do. I had decided not to pursue a career in law, and knew I had so much more to learn about how the world works,” she said.

Khan decided to study for her Master of Journalism (MJ) degree part-time while also working for Mergermarket—a media company specialising in corporate financial news and analysis—after listening to advice from Doreen Weisenhaus, JMSC Associate Professor, and her employer at Mergermarket.

Juggling a full-time job and her studies was not easy. She was very thankful for having a supportive employer. Khan said, “I wanted to take the International Reporting course taught by Thomas Abraham, but his classes were on Monday afternoon. I worked it out with my employer and took six annual leave days for those 12 classes.”

Khan strongly encourages working people to take the initiative and study the MJ course part-time as she believes it will not only strengthen their craft as a journalist but also open up other career opportunities. “I chatted with teachers and asked them how to deal with difficult situations I was encountering at work. At the same time, things that I learned from school made me better at my job,” she added.

Facing the fact that many companies expect journalists to have a wide breadth of knowledge, Khan believes that JMSC graduates are in a strong position. “One thing business news professor Rusty Todd taught me was how much I didn’t know—and that it was totally OK. This is very important for journalists. No one has all the answers, but our jobs are to go and find out as much as we can and report that to our readers.”

“I want to write stories that I would want to read,” Khan said. “I can only do that by knowing what is happening out there. Being a general newsperson is great, but being a beat reporter allows you to really decide and be thoughtful about what you want your readers to understand.”

Being a health and science reporter at Bloomberg, Khan spends a lot of time reading. She explains that beat reporters need to understand everything happening within their sectors, so they must read a lot and talk to a wide variety of people. Conversations may not be strictly necessary for the topics they are writing about now, but they must keep themselves up to date.

Khan added, “My favorite editor always told me that the best stories are like the tip of the iceberg. You as a journalist may have a mountain of information, but the reader should only see the top. That’s also part of the job: give the best to your audience.”

Having been a reporter at Bloomberg for six years, Khan still loves her job because of its variety and its opportunities for learning. “The job has never stayed the same. I’ve looked at my beat from multiple lenses and delivered different stories,” she said.

Now working for Bloomberg as Head of Asia-Pacific TV Interviews, Adrian Wong has been able to develop his strengths and explore his interests in media during his time with the company. He describes his path to journalism as being totally unexpected, “like a happy accident”.

Born and raised in England, Wong chose to study journalism after completing a Bachelor of Geography degree because he was deeply passionate about media production, but not really journalism.

Wong was drawn to the MJ programme at the JMSC because of its variety and flexibility. “I knew that I wanted to do broadcast, but I still wanted to know a bit of everything,” he said.

He also liked that the courses were practical and hands-on. Instead of talking about theories in classrooms, professors encourage students to go outside to report and write real-time stories. During the Environmental Journalism course, he was assigned to go to a press conference about climate change and met Michael Bloomberg, who founded the eponymous company in 1981.

During his studies, Wong worked as a video journalist and did news packages for ABC News as part of a JMSC partnership titled “ABC News on Campus”. After graduation, he also completed a six-week internship at CNN. “The JMSC connected us with CNN,” he said. “Of course I still needed to go through the interviews, but the JMSC made the first step, which helped a lot.”

Wong’s work at Bloomberg ranges from producing graphics to booking TV guests. “I basically take up all the roles behind the scenes,” he said. Although his official working hours are 6 a.m. to 4 p.m., Wong has never left work on time. Whenever there is breaking news that afternoon, he has to stay and plan ahead for the next day.

When the Thai king died in 2016, for example, he had to immediately think about the business and financial impact, and contact potential sources.

“Obviously it is stressful a lot of the time, but I feel like the reward afterwards is worth it because at the end of the day, you are adding value to the show, you are helping to provide context.”

Wong says that tenacity is an asset in media. “It can be a difficult business, but once you break your boundaries, it will benefit you.”

Wong also suggested that journalism students should learn to think quickly as everything can easily go wrong in the field, no matter how much planning is done ahead of time.

Katie Lam is a current Master of Journalism student at the JMSC. Follow her on Twitter here.