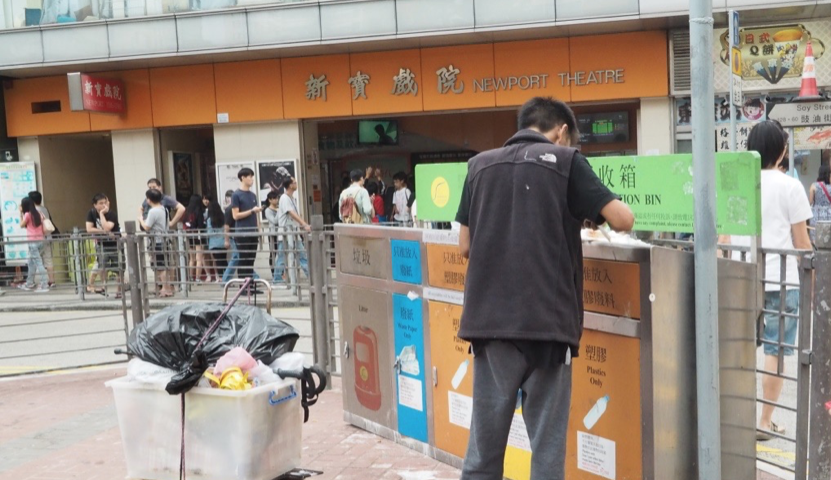 Slumped on a mattress surrounded by plastic bags building with belongings, a beat-up kettle looking out of place in the barren corner, Piu, in his late 30s, could not help squirming on his bed, with his head tilted as a fist-sized lump on his neck almost choked him.

Piu does not have a fixed address, but he sure has regular face time with social workers. The scenes at weekly midnight outreach to the homeless offers some telling moments. “It is hopeless,” he said in a voice that was semi-frantic. “There is still no response, eleven years after I applied the public housing.”“I’d rather die in the hospital. I don’t want to end up here,” the homeless man who was diagnosed with Nasopharynx cancer said. Behind him came the crowd on a footbridge in Mong Kok, hustling to and from the Mong Kok East MTR Station.

Piu was not the only one who braved the streets. Just some steps away, his younger brother was sprawling on a separate mattress, covering his head with one palm, forging a semblance of bedtime.

The homeless can be strikingly resilient, although most of them are reluctant to call the streets their home. Tommy Chu Kin-to, 24, a frontline social worker in Kowloon district said the soaring rents, constantly low income and welfare allowance priced them out of affordable homes.

The monthly rent allowance for each recipient under Comprehensive Social Security Assistance Scheme (CSSA) is HK$1,640, which is far lower than a rent even for a small flat shared by several people. A study by City University reported that 66% of the homeless people surveyed citywide did not earn enough to cover their rents.

Homelessness has been a radiating wave of gloom in communities. The Social Welfare Department had 842 street sleepers formally registered in April 2015, compared to a tally of 744 and 642 recorded in 2014 and 2013.

According to Homeless Outreach Population Estimation Hong Kong (H.O.P.E. HK) conducted by City University and three other community organizations in 2013, the figure was put even at 1,414 – about twice the official number.

The continuous rise of homelessness further underscores the bleakness of the grueling long wait for public rental housing (PRH). In Piu’s case, even over a decade of waiting is said to be not long enough.

As stated by Hong Kong Housing Authority, as of June 2015, there were 142,000 single applicants under age 60 scrambling for just 2,200 units available under the government’s quota system.

Even if the single elderly aged 60 or above are prioritized over all others in PRH applications, they still account for the vast majority of the unsheltered population. The statistics of H.O.P.E. HK suggested that 67% of street sleepers were aged 51 or above. “Without mobile phone and proof of address, they are deterred from handing in complicated PRH applications,” Chu said.

At the same time the need for homeless services is growing, the government has paradoxically been taking a harder line against them. The most disputed measure taken by the officials was the installation of 200 concrete flower pots as “greening works” along Ferry Street flyover in Yau Ma Tei in 2013, costing HK$2.53 million, resulting in an eviction of around 20 street sleepers.

Other actions like closing off some public playgrounds from 11pm to 7am, fencing off particular public areas and unwarranted removal of belongings of the homeless kicked street sleepers out from their temporary shelters.

A prolonged homelessness imperils the lives of the unhoused. An anonymous middle-aged woman found in a public playground in Mong Kok was one of the sufferers.

“Food? I just get them from rubbish bins,” she said. The houseless woman had just recovered from food poisoning, now with her inflamed right eye diagnosed as some sort of bacterial infection.

The Social Welfare Department has allotted funds to three non-governmental organizations – the Salvation Army, St James’ Settlement and the Christian Concern for the Homeless Association – to form an integrated Services Team for the homeless since 2004. Services including outreach, emergency funds and transitional housing are aimed at helping the homeless sheltered over the long term.

According to the citywide street count of H.O.P.E. HK, men accounted for approximately 93 per cent of the homeless population. Yau Tsim Mong and Sham Shui Po districts were home to the largest number of street sleepers.

It is estimated that 41 per cent of all those polled were employed, mostly having temporary jobs, while 57 per cent were under underemployed. Only half of the homeless claimed CSSA welfare allowance, with most of them saying that they preferred to scrape a living by themselves.

Chu believes that the most effective approach to help the homeless is to offer them some intensive case management, backing them up on re-integrating into society. In any case, giving out free supplies without knowing their emotional needs is just a short-term palliative.

“It is sometimes a deadlock. We are facing intractable problems like severe shortage of affordable housing, and the government’s suppression of the homeless through inaction and action,” Chu said.

“No one likes to be unhoused,” he said. “There are always some reasons why they’re living rough on the streets.”