Killer course: Students act like soldiers to answer the question, ‘Why do we kill in war?’

Reporting and photos by Corinne Vigniel

In covering the story of the missing Hong Kong booksellers—one of the biggest local stories of the year—BBC correspondent Juliana Liu described weeks of chasing reliable sources and one all-night fact-checking marathon that produced one of the most popular stories of 2016 on the BBC website.

Liu, the BBC’s Hong Kong Correspondent, spoke to Master of Journalism (MJ) students on 24 November about how the BBC Hong Kong team covered the dramatic case of the missing booksellers.

A huge amount of work went on behind the scenes tracking down the co-author of one of the provocative books on Chinese President Xi Jinping’s private life, she said. Liu was also able to convince the wife of one of the abducted booksellers to talk.

It was a difficult story to cover, Liu said, involving weeks of trying to find sources who could be trusted, vetting, checking for possible pranks, and trying to tell when people were possibly lying.

After an all-night marathon, and final checks with BBC lawyers and top news editors, the BBC had the scoop.

‘It can be scary when no one else has the story,’ Liu said. 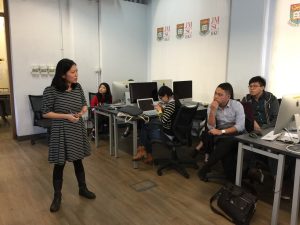 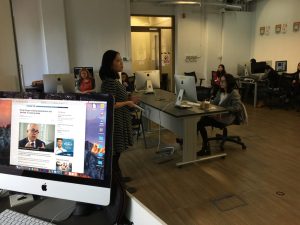 Liu, who started with Reuters and has been with the BBC for ten years, also offered some tips to MJ students currently completing the TV News Production course:

Get there early to set up the camera, especially in a place like Hong Kong with limited space, she said. Arrive 10 minutes early for interviews, collect yourself.

It’s a small industry—everyone knows everyone. Avoid arguments with colleagues—he or she could become your boss. At the same time, she said, be confident, express your opinion.

3) Give something of yourself

A personal insight into your own life may give a totally different dimension to a story. One of Liu’s most popular stories was on how China’s one-child policy robbed her of several siblings.

The application period to join the Master of Journalism programme for the 2017‒18 academic year is now open. To learn more, click here.