As one of the Big Three television networks in the United States, ABC News is one of the most recognisable news organisations in America and around the world. Over the past summer I had the privilege of working in ABC’s Beijing bureau and witnessed first-hand their news production process.

Though it’s a small bureau, I got the chance to work directly with veteran journalist Bob Woodruff, ABC’s Asia Correspondent and former anchor of ABC World News Tonight, the network’s flagship evening newscast. My day-to-day role included compiling a list of important China stories for the news team in New York, as well as researching and writing stories for all platforms of the network.

My first major assignment started on the first week of my internship when Robin Roberts, co-anchor of ABC’s Good Morning America (GMA), was about to visit Beijing.

I travelled with a group of GMA producers and scouted around Beijing ahead of her arrival. Their level of precision was really superb—they discussed and finalised the camera angles and locations prior to the actual shooting. I later learnt that a lot of planning is usually needed, as anchors might not have a lot of time on the ground.

When Robin finally touched down in Beijing later in the week, everything went smoothly and we were able to get good shots of her in a rickshaw and on the Great Wall, as well as inside a food market. It was also a wonderful experience talking to such a high-profile journalist in person about starting a career in the news industry—she was very nice and even agreed to keep my JMSC name card!

My biggest assignment of the trip, the Yulin dog meat festival, came shortly after the GMA visit.

Every year on 21 June, the little-known city of Yulin, Guangxi, celebrates the summer solstice by consuming dog meat. It is an annual event embroiled in controversy, and animal activists in the West even travel to the city to rescue dogs at their own expense. A group of animal activists had captured some unprecedented footage of a dog slaughterhouse at the back of a local market in Yulin. ABC’s Brian Ross Investigates unit was contacted and decided to file a report on it.

Yulin happens to be one of the poorer cities in China without its own airport or metro system. Hence, I had to fly southwards to Nanning—the capital of Guangxi—before hopping in a taxi for a four-hour ride to the destination. I quickly arrived at the open market as indicated by the animal activists, where I spotted two men driving past me with three dozen slaughtered dogs on the back of their scooters. The dogs appeared to be retrievers and were already dead when they were transported here.

I followed the scooters as they made their way inside the area, while pulling out my phone to capture the scene. The men were seen unloading the dogs into a trolley after they parked the scooters in front of a building labeled ‘market office’.

I managed to film the action in secret before hurriedly calling ABC’s unit in New York. The animal activists later confirmed with me that the dog slaughterhouse was indeed located inside the building. 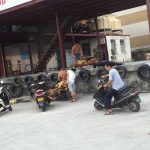 The slaughterhouse in Yulin 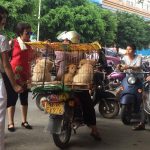 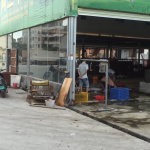 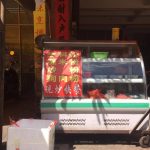 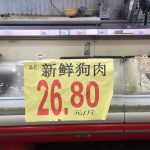 Dog meat for sale in a Yulin supermarket

It was a bizarre experience as I walked around the compound and noticed that dogs were being ‘processed’ inside a stall. At another spot, live dogs were kept inside a cage together with chickens. I still remember the sorrowful face of one dog as it laid down in silence.

As I had gathered enough footage from the market, I walked around the city and recorded food stalls and supermarkets where dog meat was being sold. Dishes included boiled dog meat and dog meat with mashed garlic. I did not try it personally, but dog meat dishes were quite widely available in the city.

During the next morning I also came across a scene where an animal activist argued with a dog vendor outside a ‘grand market’. Apparently despite increased security in the city, some locals were still eager to voice out their opposition to the festival.

The segment was finally aired on ABC’s late-night newscast Nightline on the following day. Many of my clips were aired as Brian Ross, ABC’s chief investigative correspondent, compiled the 5.5-minute report. It was the first time for me to showcase my work to such a huge audience in the United States, with Nightline typically attracting up to 1.5 million viewers every night.

As I returned to the Beijing office after the assignment, I found myself working on different feature and hard-news stories. Some of the most memorable ones included reporting on the South China Sea arbitration case for ABC’s digital platforms, as well as working on an exclusive interview with a high-ranking North Korean official. The latter story was aired across all platforms of the network, and it was a wonderful experience to contribute to it.

I would like to extend my sincere gratitude to the JMSC for its continuous support and guidance throughout my undergraduate studies. In particular, the department’s network means that it is possible for me to be working with some of the biggest names in television news.

Completing an internship with such a high profile network has enabled me to learn from and connect with some of the best in the business. It has also opened up new opportunities for me as I return to school this semester.

Eric is now in the third year of his Bachelor of Journalism degree at the JMSC. Follow him on Twitter here.