Keith Richburg appointed as new director of the JMSC

‘Some hope’ for internet freedom in China despite government crackdown, JMSC director says 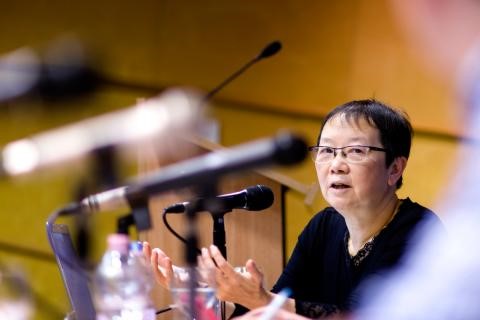 The media ecosystem in China has become quite diverse, and there is some hope for freedom on the internet despite increasing state censorship, in the view of JMSC director Ying Chan.

Prof Chan spoke about China’s media at the ‘Illiberal Governance’ conference, organised by the Central European University in Budapest, Hungary on 19 and 20 February.

The conference was held as part of the CEU’s Frontiers of Democracy Initiative, bringing together scholars, practitioners and civic activists for a discussion of autocratic forms of governance in states that retain some aspects of democracy.

Prof Chan spoke on the ‘Media and Illiberal Governance’ panel

Under President Xi Jinping, censorship and state control of China’s news media have steadily increased.  But ‘state control is only one dimension,’ Prof Chan said. ‘There are also the forces of globalisation and technological change. The media ecosystem in China has become quite diverse.’

‘You have non-market, non-party media developing. This includes investigative media. They are under pressure, but they are there. But party media is also growing. The People’s Daily (the official newspaper of the Chinese Communist Party) are told to toe the party line, but they need to make money, so they’ve expanded.’

After President Xi recently visited a number of state-owned media organisations, comical memes of his visits were posted online.

Prof Chan said they were still online the day after they were published, and that gives ‘some hope, at least, of some freedom on the internet.’

To read a full report on the conference, click here.