後大V時代中國大陸的公共言論空間 – Life After the “Big V’s”: Space for Public Expression in China 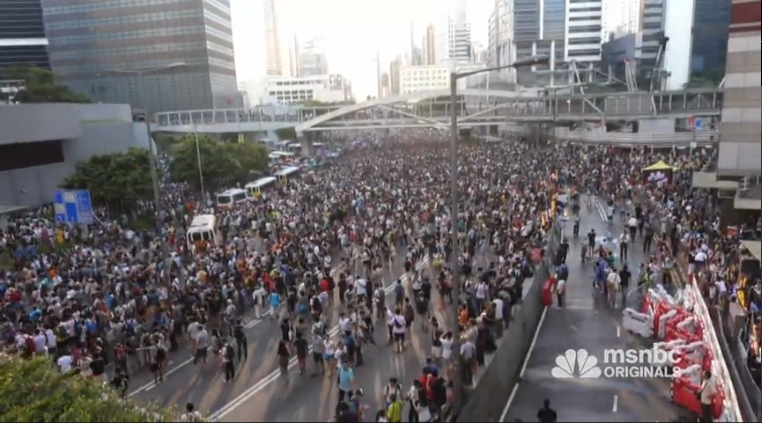 “The Umbrella Movement”, a documentary about Hong Kong’s pro-democracy “Occupy” protests that was produced and directed by a group of JMSC Master of Journalism students, has been named an ‘Honoree’ in the prestigious Webby Awards, an international programme that recognises excellence on the Internet.

The documentary was produced by a team of nine JMSC master of journalism students for US TV station MSNBC. The feature-length documentary premiered on the MSNBC television website in December 2014.

JMSC Associate Professor Kevin Sites, a former producer and foreign correspondent for NBC News and MSNBC News, acted as advisor for the project.  He said it was great recognition for the hard work the students put into making the documentary.

“There’s a lot of competition out there from major online and broadcast organisations, and these students are up against some world-class journalists,” he said. “So for them to be among the very top of these thousands of competitors is pretty remarkable considering that as little as four or five months ago most of the team had no experience in video whatsoever.”

Lukas Messmer, a 30-year-old master of journalism student from Switzerland who was editorial producer for the project, said the team were gratified by the nomination.

“All the team members are very proud and really pleased that our hard work has paid off,” he said. “But what makes us really happy is that a broad public audience liked the movie and we were able to bring the story of Hong Kong’s pro-democracy movement to a wider audience.”

The Webby Awards, sometimes described as “the Oscars of the Internet”, are presented each year by the International Academy of Digital Arts and Sciences and receive tens of thousands of entries for each category of award. A judging panel chooses the five best nominees as finalists in each category, and a further seven entries that the panel deems as “outstanding” are chosen as “Official Honorees”.

‘The Umbrella Movement’ was recognised as an Honoree in the “Online Film & Video: News & Politics: Individual Episode” award category.

Sites said the award was a testament to the student’s enthusiasm and tenacity, and would stand them in good stead for any future career.

“These students looked at the news events happening around them and decided they had to be a part of it and this, more than anything, is going to ensure their success going forward,” he said.