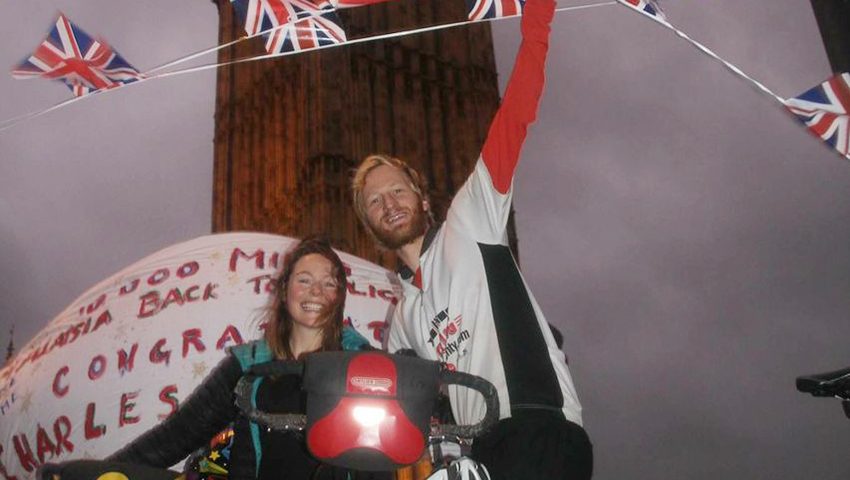 If Phillippa Stewart, a JMSC graduate and multi-media journalist, was looking for fodder for stories, her year-long charity bicycle ride from Malaysia to the UK produced enough tales to fill a book, and also won her an international photographic competition.

From crashing a wedding in Uzbekistan, to camping in a field of unexploded mortars in Tajikistan, British-born Stewart and her partner, Charlie Hoare, covered more than 15,000 kilometres across Southern and Central Asia and Europe, and raised more than five thousand pounds for the mental health charity Sane in the process.

Dismounting for the final time on their arrival in the UK on December 23, Stewart said of the journey: “There were definitely days in the saddle where our bums hurt, our legs burned and we got stuck in terrible weather.”  But her journalistic curiosity inspired her to keep going.

“We’ve experienced so much human kindness, from being invited into people’s homes to being dragged into their weddings,” Stewart said. “I took photos and videos along the way, and heard so many stories from people, and it was these little glimpses into people’s lives that I absolutely loved about the trip.”

In between cycling up hills almost 5,000 metres high on the Tibetan-Sichuan highway in China, and digging herself out of a snowed-in tent in Kazakhstan, Stewart won an international photographic competition, the Other Hundred, with one of the many photos she took on the trip.

She first learned video and still photography while completing a Master of Journalism degree at the JMSC in 2010, and became a news reporter and anchor at Hong Kong television station TVB after graduation.

She moved to Malaysia with Hoare in July 2012, where she started freelance reporting and photojournalism, and has contributed stories and photographs to the BBC, Al Jazeera, Forbes and the British newspaper the Telegraph.

After five years in Asia, Stewart felt the urge to return home to the UK.  When her partner suggested “going overland” and raising money for charity along the way, she said she saw it as “a work opportunity as well as an adventure”.

Although never previously an avid cyclist, she said she soon came to see it as a great way to see the world as “you go slowly enough to see things, but fast enough to get there.”

The pair started in Kuala Lumpur on December 8, 2013 and cycled up through Southern and Central Asia before crossing from Turkey into Europe, arriving in London just in time for Christmas with their families.

Stewart now plans to take some time to readjust to life out of the saddle, before returning to freelance journalism and writing a book about the many people and their fascinating stories she encountered on the adventure.

“The trip really has restored our faith in humanity – and led to some fascinating conversations with a whole cross-section of society,” she said. “We read the news and think the world is a scary and horrible place, but this trip proved to me that it’s not, it’s just fantastic.”

You can read more about Phillippa Stewart’s trip on her website, Back to Blighty, and donate to the charity Sane here.