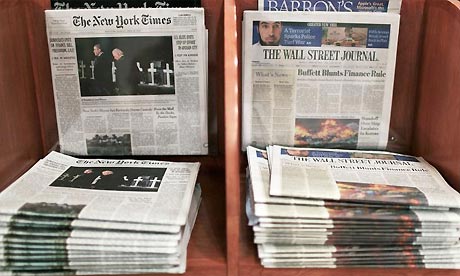 Two seasoned journalists from the The Wall Street Journal and The New York Times have joined the Journalism and Media Studies Centre as Adjunct Professors.

Adam Najberg, the Asia Digital Editor for The Wall Street Journal, will be teaching a course on financial journalism. A journalist for over two decades, Najberg began his career as a Beijing freelancer for The Washington Post during student protests in 1989 and then went to work for The Associated Press in San Francisco and International Community Radio Taipei in Taiwan. He joined Dow Jones & Co. in 1994 as a Hong Kong reporter. He is the co-author of a 2005 work of satire, Stooples: Office Tools for Hopeless Fools, and the 2013 novel, Chongqing Burning.

Najberg sees the role of good journalists as being, first and foremost, good storytellers. “The primary difference between today’s journalists and those of prior generations is that we now have a wide array of platforms and media,” he said. “But you have to separate platform and technology from quality of reporting and storytelling.” He points out that the best journalists still tell their stories one word at a time. “Their word choice, their diligence and unique angles make them stand above the rest. The push for speed or quantity, the drive to deliver on new platforms, they haven’t diminished great work, not a single jot, and they never will.”

And why study financial journalism? “There will always be a need to unravel the mysteries of money. The good news for aspiring reporters is that there’s still plenty of room in the world of financial journalism, and the jobs are more steady and pay much better than your average general-assignment reporting jobs,” Najberg said. And for those put off by the technical side of finance, he said it’s not hard to pick up and apply to your writing. “Once you do, you more than likely will find a very long and bright career path unfolding in front of you.”

Teaching a new course on opinion writing is Brian Zittel, who has worked for The New York Times and its global edition (formerly the International Herald Tribune) since 1996. As an editor for the Views pages of the IHT in Paris from 2003 to 2009, he commissioned and edited op-ed essays and edited the Letters to the Editor. He moved to Hong Kong in 2009, becoming the newspaper’s first opinion editor for Asia. In Hong Kong, he commissions and edits op-ed essays from the region, with a particular focus on China. He was part of a small team that developed Latitude, the opinion department’s international blog. He is a graduate of New York University.

For Zittel, the most basic task of a journalist is to gather and disseminate information, and the best way to do that is by telling a good story. “The vehicles for telling stories continue to evolve but, in my view, journalists working today face the same core challenges and need the same core skills as journalists from the past,” he said. “We need to process information and find a compelling way to share it. The written word is still a powerful tool for telling good stories.” His class will be about opinion writing, with a heavy emphasis on writing it well.