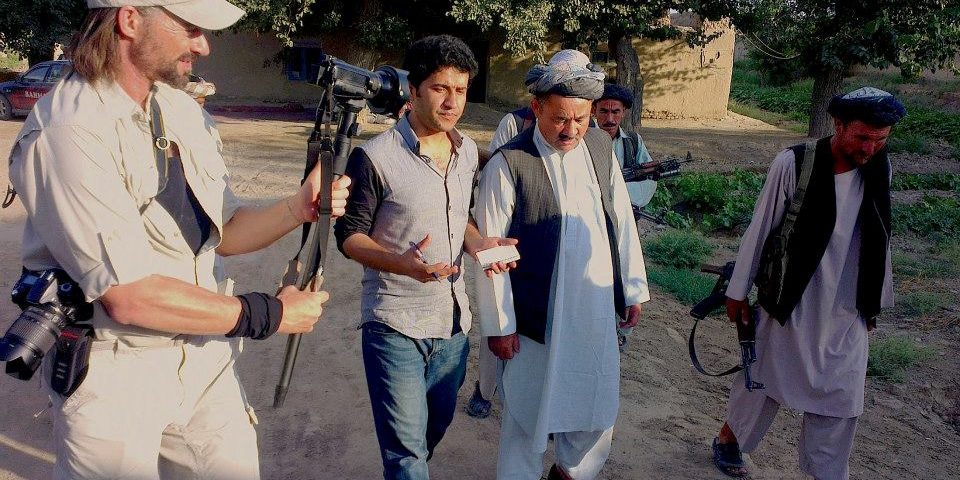 According to Abdul Matin Sarfraz (MJ, 2013), these words were spoken to him in July by a former fighter for the Taliban. The two men were in a house in Sarfraz’s native Afghanistan, with guns hanging like paintings on the wall.

“I asked him why,” Sarfraz said. The man told him his main goal when he was with the Taliban was to kill foreigners and the Afghans working with them. But now, the man said, he understands the value to Afghanistan of education. ‘Why should I kill you,” he asked Sarfaz, “when you’re really good for our country, because you’re educated?’ ”

The conversation was one of the many intense moments Sarfraz had while traveling and reporting in Afghanistan this summer with JMSC professor Kevin Sites, a veteran reporter of war and other conflicts.

Sites is currently retracing the steps he took in 2001, when he followed the Taliban’s retreat across the length of Afghanistan during the US-led NATO invasion of the country. He is writing about what he found during this latest journey for Vice.com.

[Sites’s full account of their conversation with the former Taliban fighter, “Confessions of a Taliban Fighter“, can be read here.]

Sarfraz, an MJ who took Sites’s Advanced Online Journalism course – and the first Afghan to attend the JMSC – accompanied Sites for two weeks at the beginning of his trip. He acted as Sites’s guide and translator and helped him shoot video, take photographs, and find and research stories for Vice.

“I met Kevin at the border when he crossed from Tajikistan on a small boat,” Sarfraz said. “From the border we traveled through Takhar province, Kunduz province, and then drove more than eight hours from Kunduz City to Kabul. We interviewed police chiefs, and warlords … and a woman who owns her own radio station – there are four or five radio stations now in Takhar that have women working in them … We also met wrestlers in Kunduz who were really happy to see us because it was the first time a foreign journalist came and covered their story.”

Sites said that Sarfraz’s skill as a translator and journalist, as well as his knowledge of Afghan society, were invaluable. “[I was able to get] totally immersed in Afghan culture through the help of my former student,” Sites said.

For Sarfraz, who was working as a journalist before entering the JMSC’s master of journalism program, the trip was confirmation of the plan he laid out for himself before coming to The University of Hong Kong in 2012.

“I came to HKU so I could return to Afghanistan and share the skills I learned,” Sarfraz said. “In Afghanistan the problem with education – the teachers, they teach the old books and the old information, what they taught 10 years ago, and in many classes there is nothing new. Here in Hong Kong…every day they are coming with the new information and students are encouraged and teachers give students a chance to talk a lot.”

After traveling with Sites, Sarfraz shared his new knowledge and spoke about media law and journalism ethics at a workshop set up by the Afghan Independent Journalists Association. He will be speaking about independent media and social media in Afghanistan at the Harvard Project for Asian and International Relations Conference in Dubai at the end of August.

Sites will finish his trip next week and return to Hong Kong to teach classes in the fall semester at the JMSC.