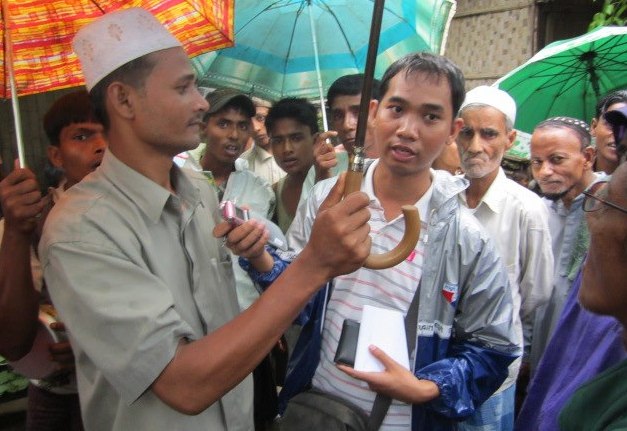 Swe Win (MJ, 2009), on the right, interviews Muslims made homeless in the aftermath of sectarian violence in western Myanmar last year.

Sasa Vucinic, founder of IndieVoices, hosted a Media Entrepreneurial Pitch Session at the JMSC in May.

Three new media project ideas – an online platform about violence against women in Hong Kong and China, a video game to help treat depression in women, and an independent media outlet for Myanmar – received a big boost at the Media Entrepreneurship Pitch Session held recently at the Journalism and Media Studies Centre.

The session, which was designed to encourage and develop digital media and entrepreneurial skills, was held in late May as part of the New.Now.Next Media Conference (N3Con), organized by the JMSC and the Asian-American Journalist Association’s Asian chapter.

“We could have awarded at least two more excellent ideas, but had only three awards,” said Sasa Vucinic, who hosted the pitch session and headed the jury. Vucinic is the founder of IndieVoices, a new crowd-funding platform that raises money to support independent media.

The three winners will receive business and entrepreneurship training, strategic guidance, and mentoring by Vucinic. He will also help the winners prepare their projects for eventual listing on the IndieVoices website, where they will have the opportunity to raise funds for the projects from the public.

Master of Journalism candidates Anjani Trivedi and Olivia Rosenman won recognition for their proposal to create an online multimedia platform, called TableTalk.Asia, to raise public awareness of violence against women in Hong Kong and China – a situation that is underreported in the media, according to the two women.

The project, which also won a Social Inclusion Activities Grant from Hong Kong University in April, aims to encourage public debate about the issue.

“We’re delighted to have received this opportunity to make our [project] viable and hopefully sustainable,” Trivedi said. “This will take us one step closer to our goal of putting the issue of violence against women on the table and have an open and frank conversation about it.”

Another winner was Swe Win, a JMSC alumnus (MJ, 2009) and regular contributor to the New York Times’s “Latitude” blog, who proposed an independent news outlet in his native country of Myanmar.

Swe Win (MJ, 2009), on the right, interviews Muslims made homeless in the aftermath of sectarian violence in western Myanmar last year.

The project includes plans for both an online news website and the publication of a daily newspaper which, he said, is still an essential form of media in Myanmar, where the majority of the population has no access to the internet.

Press freedom has recently been introduced in Myanmar and the newspapers there are still controlled by the families of the military elite, he said. “I want to create a media platform managed by … independent journalists who are eager to tell … the true stories of Myanmar in the highest spirit of journalistic integrity and humanism.”

Swe Win said he was profoundly encouraged by the prize. “Without such support, my idea will remain a mere dream,” he said.

The third winning idea came from Melissa Kronenberg, a graduate student at the Hong Kong campus of the Savannah College of Art and Design. She proposed a video game for women in their sixties and seventies who are suffering from stress, anxiety, or depression. The game, called Agon & Alea, creates virtual companions on mobile devices to help players feel less isolated.

Peter Herford, Professor of Journalism at Shantou University’s School of Journalism and Communication; Frank Proctor, founder of Muse, an English and Chinese-language multimedia publisher; and Dr. Jose Rueda, an entrepreneur and the Professor of Game Development at the Savannah College of Art and Design, joined Vucinic on the jury for the session.