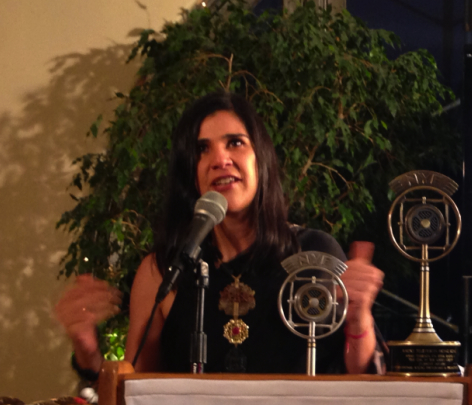 Hora (MJ, 2012) won the prestigious award for her program, The Girl in the Green Dress, the story behind the Pulitzer Prize-winning photograph of a 12-year-old Afghan girl screaming over the bodies of her relatives moments after a suicide bombing in Kabul. The photo was shot by photojournalist Massoud Hossaini.

The show presents Hora’s emotional interview with Hossaini, who recounted how he had been knocked to the ground by the explosion but struggled to his feet, injured and bleeding, to continue taking photographs and document the tragedy.

The show aired on November 25, 2012, as an episode of Hora’s weekly Asian Threads radio programme on RTHK Radio 3.

Hora thanked the instructor of JMSC’s Radio News Production Course, Angharad Law, for teaching her how to use the power of radio to tell a story.

“Angharad’s class oriented me into the world of radio philosophically, technically and editorially speaking,” Hora said. “I can honestly say that it taught me everything I knew – up until the point I started at RTHK – about radio and certainly helped me land my job there.”