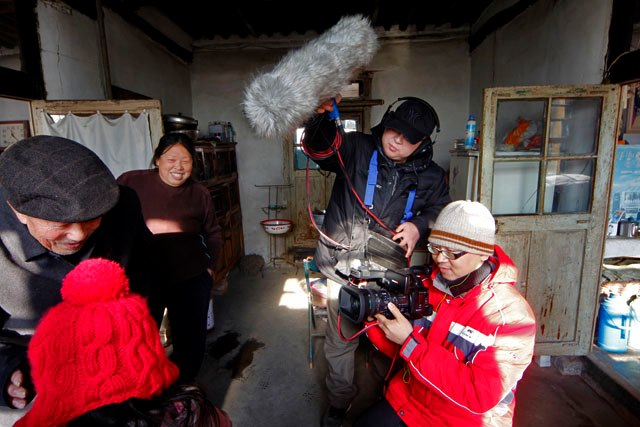 Vincent Du (MJ, 2011) and his sound recordist at work filming Deqi for his documentary "Almost Famous".

Vincent Du (MJ, 2011) and his sound recordist at work filming Deqi for his documentary “Almost Famous”.

JMSC alumnus Vincent Du’s latest documentary has been picked up by Al Jazeera. “Almost Famous” features China’s largest school for rock music and will play on the network’s English-language programme, “Witness”. We caught up with Du (MJ, 2011) to hear how the project has evolved since Al Jazeera commissioned a version, and to get his take on successfully pitching and producing documentaries for the big networks:

Like much of Vincent Du’s other work, “Almost Famous” aims to show a side of Chinese society not generally seen by the outside world. The film follows the journey of seven-year-old Deqi, a protégé drummer at the Nine Beats Education Institution for Modern Music, to a percussion competition in Italy. Du explained that Deqi’s father, Mu, newly wealthy but from a poor rural background, “is looking to her to fulfill his dream”. Deqi was sent to board at the prestigious school and practices long hours in order to hone her talent. The film explores the impact that the stress of constant practice and competition and the pressure of meeting the expectations of China’s ambitious and aspirational parents has on a young child.

In July, Du sent a trailer that profiled three of Nine Beats’ young students to Open Call Asia, for consideration for Al Jazeera’s Viewfinder series, which showcases independent filmmaking from around the globe. Al Jazeera then invited Du to London to meet the “Witness” programme editor and executive producer to discuss the possibility of working together. His proposal was chosen for air after this meeting, but he was first asked to send still more preliminary work.

He submitted a piece made for JMSC professor Nancy Tong’s class that focused on the encroachment of urbanisation on a small Hong Kong village close to the mainland border called, “The Last Villagers“. Al Jazeera then asked Du to attend the Viewfinder workshop at the Busan International Film Festival in South Korea last October, where he worked to develop the story further. In the end, he was commissioned to shift the focus of “Almost Famous” to a more in-depth study of one single student.

Du chose to focus on Deqi Mu, he explained, because her “family reflects the progress of Chinese society in transition…perfectly.” Her father was from an impoverished village, and was among the first generation of migrant workers to become wealthy owing to China’s economic reforms. A typical Chinese parent, Du continued, Mu “is investing everything in his daughter for the future of their family. So, as I see it, the documentary is not only about the little girl, but also about the whole family in contemporary Chinese society”.

He is currently mid-way through filming, and expects the product to be finalised by February. The release is scheduled for June.

Du advised anyone looking to market a documentary, or even starting out in documentary journalism, to learn as much as possible about the technical side, such as editing and filming techniques, before setting out. He said the most important thing to master was the ability to tell a compelling visual story that helps viewers make an emotional connection.  Du researches and pre-interviews his documentary ideas. He writes proposals and makes trailers before pitching, which he does through pitch competitions and events like the International Documentary Film Festival in Amsterdam, the Sundance Festival in the U.S., and the Sheffield Documentary Festival in Britain.

Du has also found it “important to understand foreign [Western] media and how it works”. For example, he said, your work needs to explain cultural differences, unnecessary when working on a Chinese subject solely for a Chinese audience. “Western audiences may think that you cannot learn rock (music) like academic study, because it is free expression. But it is no difference for Chinese children to learn maths, English, ping pong or rock”, he said.

“Be inquisitive”, Du advised.  “You need to go to as many film festivals and workshops as possible”, because “you can’t get all the answers from the university”. But he still said he considered university the best place to start building a network. “You need to learn from classmates as well as teachers and keep contact with people, even though they may work in different areas”.

Deqi hikes with her father at The Great Wall.

According to Du, filmmaking is a continual learning process. He is in daily communication with his two producers – the Al Jazeera producer who is based in Malaysia, and the producer from the film production company OR Media who is based in London – but all the work is done remotely. Al Jazeera is overseeing the film’s progress, but ultimately Du said its up to him to film and edit the work before sending it to Al Jazeera as a finished product. OR Media is assisting Du with the production and post-production.

Du admits that working for the first time with the big networks can be daunting. He said you need a very clear idea of where you want your work to go, but you must also be flexible. “We have different opinions”, he said of his producers. “I think Deqi’s Italy scene should [be] put at the end of the film. The producer gives me another option that probably we can put this part at the beginning. Even though we have not made the final decision yet, I believe it is a good way to listen to producer’s opinion, as she’s more professional in terms of how to tell the story”.

In addition to “Almost Famous”, Du has produced shorts and documentaries about such issues as homosexuality, cancer and Catholicism in China. He said he hopes his work will help raise awareness of social issues in the country that are often hidden from outside view, and “make a bridge between China and the West.”