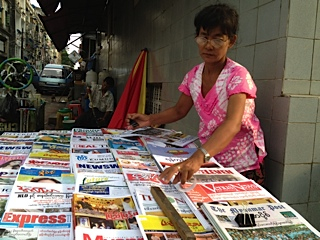 The large number of newspapers for sale on the street in Yangon, Burma indicate a newly thriving free press. (photo credit: Ying Chan)

Four students in the JMSC’s Master of Journalism programme are winding up the first internships the school has ever arranged in Burma.

Ma Ning (MJ, 2013) and Tony Yoo (MJ, 2013) interned with The Myanmar Times, whose co-founder and deputy CEO, Sonny Swe, has been in prison since 2005 for publishing the paper without government approval.

[Yoo’s diary of his first week in Burma may be read here.]

Shirley Xiao (MJ, 2013) and Phoebe Peng (MJ, 2013) worked at Mizzima, one of the first independent news organizations in the country. It was founded by a group of Burmese journalists who were in exile in New Delhi, India where its head office is still located.

The internships are part of the JMSC’s new Burma Project, which was established to strengthen ties with the Burmese media and help support its development.

Peng said she wanted to go to Burma because it was in a time of historical transition and she wanted to see a newly developing democracy up close.  “I also wanted to know more about the Chinese people who have been living in Burma for centuries”, she said. “What was their life like? How did they see themselves? What did a Burmese Chinatown look like?”

While working at Mizzima, she got to answer some of those questions. She wrote about the new generation of Chinese who are growing up in Burma, and also about local non-governmental organization resistance to a US$2.4 billion industrial project financed by the China Development Bank.

Xiao said she saw the movie “The Lady” in 2011 and had wanted to go to Burma ever since. “It told the story of the opposition leader Aung San Suu Kyi, who struggled to lead Burma to become a democracy and (who) became the first woman in Asia to win a Nobel Peace Prize”, said Xiao. “It made me want to come here myself to explore the issues of democracy, freedom, and human rights in Burma”.

She and Peng co-wrote articles about monks who were arrested during protests against a joint Burmese-Chinese mining project, and about Burma’s first international concert, featuring a performance by American musician Jason Mraz. Their articles have prompted Mizzima to publish its first ever issue devoted to China-related stories.

Ying Chan, director of the JMSC, said Burma is a special place. “Local change there is taking place at a very fast speed”, she said. “This is the latest frontier of news and journalism in Asia. It’s important for our students to go there and learn and be able to contribute to the opening of the country”.

Last fall Chan visited Burma with fellow board members of the Media Development Loan Fund, a New York-based non-profit that supports independent news outlets in countries that have a history of censorship.  The purpose of the visit was to gauge the state of the media in the country.

“There is lot of excitement in Burma for independent media and the development of a free and robust press”, she said.  “But there are a lot of challenges too. We’re cautiously optimistic about it”.

Lauren Dockett, the JMSC’s Professional Practice Manager, said the centre was enthusiastic about sending students to the country for the first time. “They warned us ahead of time that when it came to reporting and filing stories, the internet could be spotty and there were issues with a lot of the infrastructure”, she said. “But the students took it all in stride and published some terrific work”.

Hong Kong University has a long-standing relationship with Burma. Vice-Chancellor Professor Lap-Chee Tsui led a delegation to the capital, Naypyitaw, last November to present an honorary Doctor of Laws degree to Aung San Suu Kyi.  Swe Win (MJ, 2009), who spent seven years in prison in Burma for anti-government activities before he snuck out of the country and enrolled at the JMSC under a pseudonym, now regularly contributes op-ed pieces about Burma to the New York Times’s “Latitude” blog. He provided advice about setting up the internships.