Nov 9: Career Talk – How to Light a Prairie Fire: Engaging Across Social Media on a Mass Scale 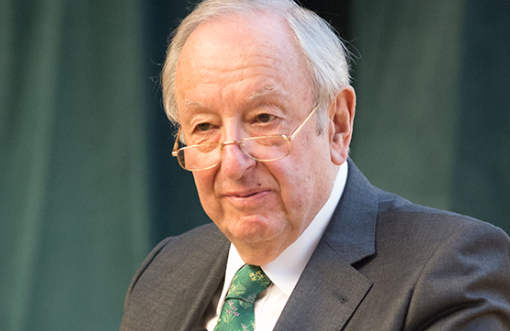 Both Hong Kong law and the British laws on which it is largely based should be reformed to increase protection of “the fundamental right to freedom of expression and public information”, while still safeguarding individuals against unfair defamation, a distinguished British campaigner for free speech has said.

Lord Anthony Lester, a member of the British Parliament’s Joint Committee on Human Rights, called for the abolition of such offenses as criminal libel, blasphemous libel, seditious libel and obscene libel.

Speaking at The University of Hong Kong on November 2, he said these “arcane offenses” had already been abolished in Britain, and that a British official had “expressed the hope that the abolition would help the United Kingdom to take the lead in challenging similar laws in other countries when they are used to suppress free speech”.

Such laws, he said, are still in place in Hong Kong, and he called for their abolition.

“Our two islands and our citizens and institutions have so much in common,” Lester said, “and so much we may achieve together”.

While he said the abolitions were a step in the right direction at reforming the notoriously stringent English defamation laws, Lester urged that the reform should go further.

He quoted a statement by the United Nations Human Rights Committee, which said that English defamation law in the past “has served to discourage critical media reporting on matters of serious public interest, adversely affecting the ability of scholars and journalists to publish their work.

“The advent of the internet and the international distribution of foreign media also creates the danger that [an] … unduly restrictive libel law will affect freedom of expression world-wide on matters of valid public interest”, the committee said.

Lester has proposed a bill to reform Britain’s defamation law, which has been adopted by the government and is now making its way through the British parliamentary system.

Audience at the Graduate House.

He said his bill is “a once-in-a-generation opportunity” to reform Britain’s defamation laws. “The better free expression is protected”, he said, quoting an editorial in The Guardian newspaper, “the better the UK can argue internationally against oppression and persecution”.

Since Hong Kong law is based on British law, Lester recommended that reforms also be made here. For example, he said, punishment for “blasphemous libel” is still on the books here.

“Blasphemous libel is still unlawful in Hong Kong, as a common law speech crime,” he said. “It is listed together with ‘offences against religion’ and ‘publishing blasphemous, seditious or defamatory libels’ in the Magistrates Ordinance”. These offenses, Lester said, are often used around the world to suppress free speech, criticism and dissent.

Though Lester doubted whether a Hong Kong court would uphold the constitutionality of blasphemous libel if a prosecution were brought, he said it should still be struck from the books. “It is an archaic and potentially divisive offence and is incompatible with the fundamental right to freedom of expression”, he said.

Lester’s speech was sponsored by the Journalism and Media Studies Centre and the Centre for Comparative and Public Law at The University of Hong Kong. [Click here to watch the full lecture.]

Lester was also a guest on Radio Television Hong Kong’s Morning Brew on October 31. Listen to the interview here.