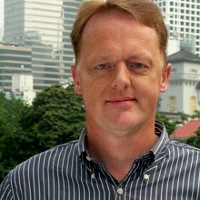 Rob McBride began his career in the early 1980s, reporting from the Falkland Islands in the aftermath of the South Atlantic Conflict. After working for commercial radio and then Granada TV in Manchester, he transferred to London in 1989 and worked for Thames TV, ITN and TV-AM.

In 1992, he joined a news agency to work in Asia for international broadcasters ranging from Channel 9 of Australia to the BBC and Sky News in Britain.

He also has worked for CNBC and National Geographic Television. In 1999, he became a freelance pioneer in Asia of video journalism. He has worked extensively in the region for Star TV, and regularly for companies as diverse as PBS network in the US and UN Television.