HKU Journalism is renowned for its first-class multimedia programmes, and this year’s Mick Deane Scholarship for Video Journalism exemplifies that excellence with not one but two winners.

“This is the first time we have had a tie for the Mick Deane scholarship award,” said Matt Walsh, Director of the HKU Master of Journalism Programme.

Jason Xue Chi (MJ, 2021), from China, and Aimee Moon Jiyoung (MJ, 2021), from the U.S., impressed the judges and course instructors equally — but with different skills and approaches. “Both Aimee and Jason did superlative work, each in their own ways,” Matt added. 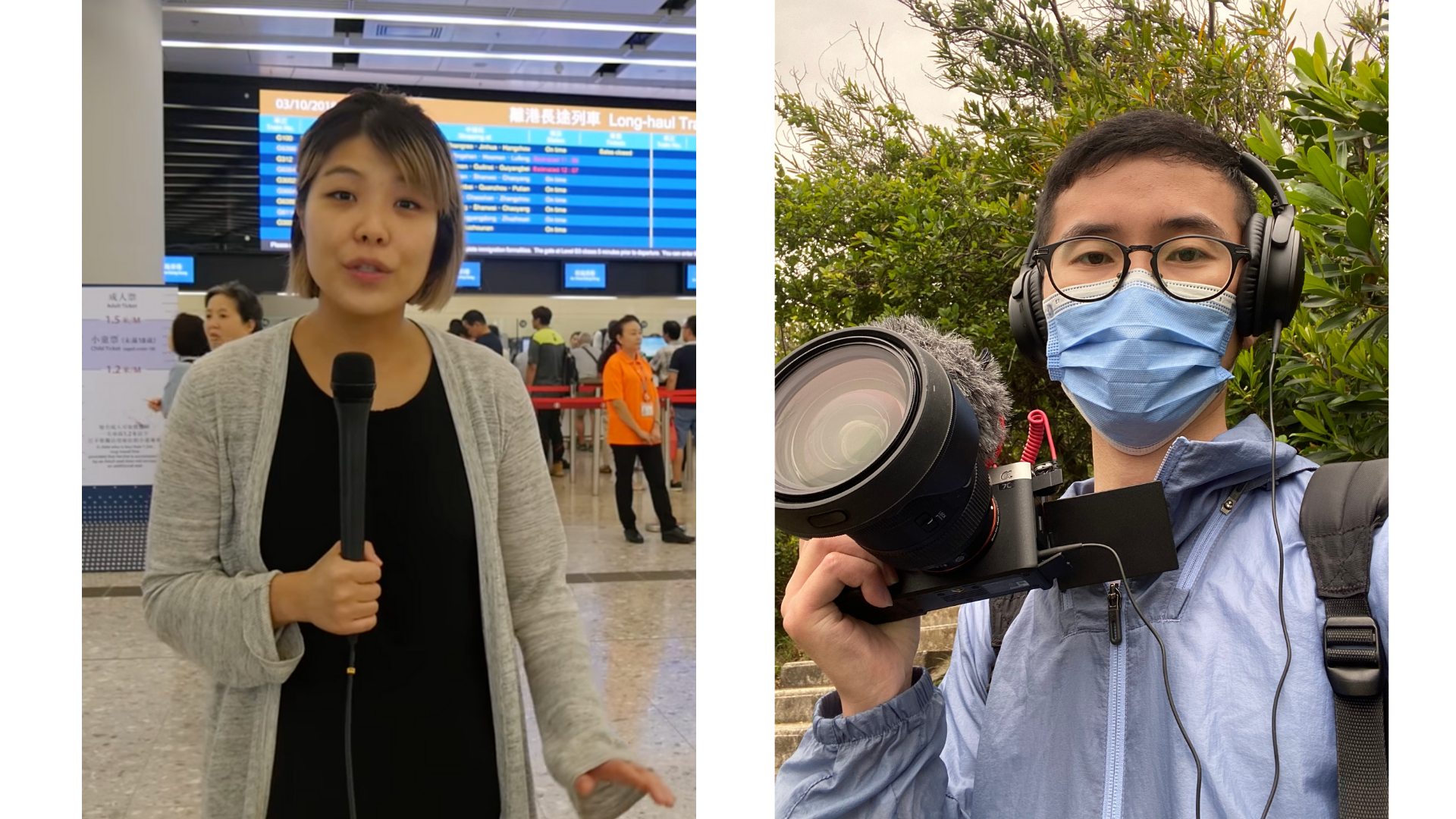 “Aimee’s videos showed depth of detail and excellent use of a variety of visual techniques to tell stories from a mature point of view,” he said, while “Jason’s cinematography set him apart from other students and his sophisticated camera work showed that he is ready for professional challenges.”

“Aimee is born to be a journalist,” said Eva Tam, an award-winning Canadian video journalist and Honorary Lecturer at HKU Journalism. “She takes timely news events and dives deeper into the issue, such as with how the coronavirus and regional politics is impacting the livelihood of Hong Kong residents.”

Eva added that Aimee knows how to make the best use of sound and video. “She finds strong and colourful characters to tell her story and knows how to pick the best sound bite to engage the audience,” she said. And as Matt points out, it’s not just technique that makes a great journalist. “Jason also stepped up to help his classmates with great generosity.”

Jason said he was thrilled at being selected. “I know how to use a camera, and how to compose a beautiful image,” he said. “However, I didn’t know how to edit videos, I didn’t know how to shoot for editing, how to interview, or how to select and combine footage to tell a compelling story. HKU Journalism taught me all those skills and knowledge.”

Similarly, Aimee was “stunned” at the news. “Learning how to edit video and create explainers was one of the most exciting parts of the Video News Production course,” she said. “I loved learning tips and tricks for replicating the effects I saw on TV news packages growing up, and studying how reporting styles have changed for platforms like YouTube and social media apps.”

Chloe Feng Xue (MJ, 2020), a judge and last year’s scholarship winner, said she had noticed an evolution in style after only a year. “I think the videos this year were more creative than in my year, in terms of storytelling and production,” she said.

She was not surprised that two winners were chosen. “Being a judge was, honestly speaking, much harder as it was difficult to choose the winner — they all did great jobs.”

Aimee and Jason were both deserving of this award “because they exceeded expectations by such wide margins,” Matt added. “Their work was so impressive, it was hard to say that one achieved a level of excellence better than the other. A dual award is the fairest way to reward their efforts.”

HKU Journalism teaches video production through acclaimed instructors and state-of-the-art equipment and facilities. “We teach the current trends of video journalism such as using data-driven motion graphics,” said Eva, adding that she is working on enhancing the course further through the use of new technology and filming/editing methods. “We could ask students to incorporate GoPro or drone shots.”

Although Aimee and Jason were awarded the scholarship, the two other finalists — Katherine Cheng Kai Yun (MJ, 2021) of Canada and Riley Chen Xin (MJ, 2021) of China were highly praised.

“Though I had a background in photography, I entered HKU Journalism with zero experience in creating video,” said Katherine. “I had never used a video tripod or Adobe Premiere Pro before, and the world of audio was one that I was unfamiliar with. In less than a year, the programme was able to build my videography skills from the ground up.”

Katherine said she wouldn’t have progressed without her instructors, Associate Professor of Practice Kevin Sites and Lecturers Diana Jou and AJ Libunao. “Diana and AJ were infinitely patient and creative in teaching the basics of controlling tools such as cameras, tripods, and mics.”

Riley, who thanked Kevin for his guidance, said making the final four has inspired her to be even better. “I would like to polish my filming skills and editing skills,” she said. “As you can see in my video, some shots are kind of shaky and some editing skills are not so mature. I will keep pursuing my dream as a video journalist and hope I can compete for more video awards in the future.”

The Mick Deane Scholarship for Video Journalism was established by Asia Pacific Vision (APV) in honour of TV journalist Mick Deane, who was killed by a sniper’s bullet at the age of 62 while covering protests in Egypt in August 2013. Deane had previously worked in Hong Kong from 1988 to 1994 as ITN’s Asia cameraman.

“I was honoured and grateful to be named as a finalist,” said Katherine. “The career and character of Mick Deane is one that I strive towards, and to be considered for such a scholarship is highly meaningful to me.”

The scholarship, which comes with HK$20,000 in cash, is for that student who best exemplifies Deane’s spirit by having the potential to be a teacher and mentor. Jason and Aimee will share the prize money.

George W. Russell is editor-at-large at JMSC and works as an editor in the Financial Times Hong Kong bureau.